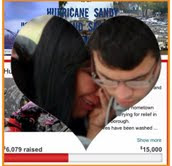 Tonight's episode of Mob Wives titled "After the Storm" picked up the day after Hurricane Sandy hit Staten Island. This was a very emotional episode for everyone. Even if you were not in New York when the storm hit, you remember how bad it was. I put together a collage below of pictures from the storm with a quote that Ramona said on the show. "Staten Island Saved Staten Island". The other picture in the collage under the quote is the Mob Wives Saving Lives charity that Renee set up (while she was in Fl. in rehab) for people to donate money to after the storm. I myself donated to this charity, and it really made me feel good to know that I was helping others who were in need. 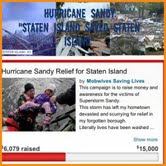 The show begins with Carla in the background describing what she woke up to the next morning after the storm had past. Carla says that she woke up to it being pitch black outside and everything was really quiet. Karen says that people lost everything and people loss loved ones. Karen was staying in Mid town Manhattan during the storm. She says that when she was allowed to come back on the island she felt like she was living in the twilight zone. Drita says that she stayed at her mom's with her daughters and when she came back, her street was fine but the next street over had massive destruction. Big Ang says that when she woke up the day after the storm hit, she figured that everyone was okay because her house was fine and she still had power. However, when she went outside to drive around everything looked like the end of the world. The girls explained that certain streets got hit harder than others did. Love said that she had to throw out some things that were destroyed in the storm. Her car was destroyed. 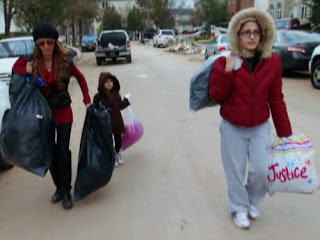 Drita and her daughters packed some clothes and toys up from their house and donated it to people who were in need. Drita said that driving to her house it looked like a war zone. 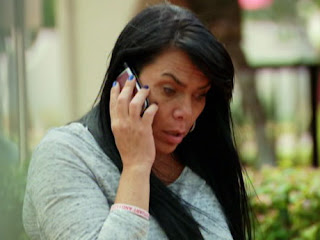 When Ramona calls Renee in Fl while she's still in rehab, she fills her in on how bad the storm hit the island. Renee is shocked by what the storm did to everyone in Staten Island but she's thankful that her family is okay. Big Ang made a bunch of food and her and Neil took it to a shelter where there were kids staying there from the storm who lost their homes. Ang played and talked with the kids there. Ang loss the salon that she had just opened 8 weeks before the storm hit. 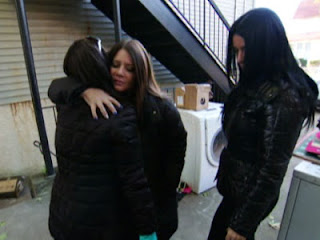 Karen and Ramona went door to door handing out supplies to friends and strangers who were in need and left with nothing. One of their close friends lost just about everything in their home. Ramona said that Staten Island became the forgotten borough and that they had to help each other rebuild after the storm. Vh1 did a great job taking the cameras into some of the places that no one had seen yet. I remember Ramona being on Dr. Drew and them going door to door trying to help out and find out why no one had come to help them rebuild or hand out supplies. 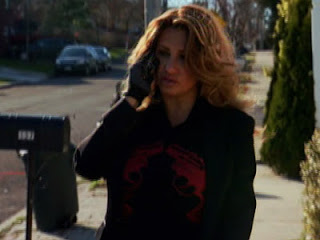 You can definitely count on Love to lighten the mood when the show starts getting sad from seeing all the devastation from the storm. This was probably one of my favorite Love scenes ever so far this season. When she gets a call from her ex boyfriend Joey (the iron man) who calls to see how she made it through the storm he wants to get back together. Love says that her history with men haven't gone so well. She says that it's not like she's dated guys from a butcher, a baker, a candle stick maker (best line of the night by far from Love, couldn't stop laughing). Love says she's dated a car theft, home invader, robber, attempted murderer etc. I could not stop laughing during this scene because of how crazy Love and Joey's relationship was. 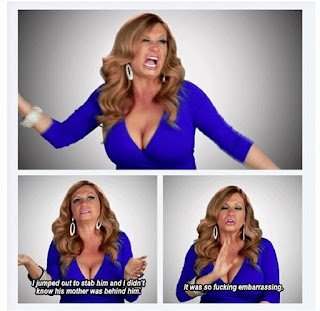 Love says that she calls Joey "the iron man" because every time she stabs him the knives break (this had me laughing). Love says that she's stabbed him so many times that she can't remember why she did it. Love said that she doesn't know why she and Joey keep getting back together, but that it may have something to do with her stabbing him. 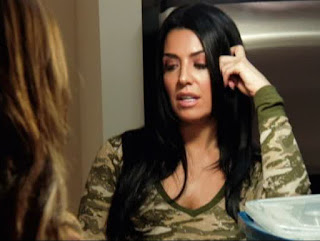 Still helping out others after Hurricane Sandy, Ramona finds an apartment to move to. When Ramona has Karen help her move in some of her stuff, Ramona says that this is the first time that she's moving on her own with her kids as a single mom. Even though she still hasn't told anyone that she's secretly engaged to Joe (who's still behind bars), Ramona hopes that one day when he gets released things will turn back to normal and they can have a party and tell everyone that they're engaged. 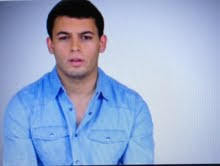 When AJ goes to FL. to visit his mom Renee in rehab, they have a family session. Can I just say that after 2 seasons and 5 episodes into season 3 we FINALLY get to here what AJ has to say about his mom being in rehab and how he feels about her addiction. The guy cleans up nice for his first interview. Hes got a nice style going for him. Clean cut, shaved a little, and no glasses. Not bad for his first interview. Let's hope he gets to have more of these interviews later in the season. 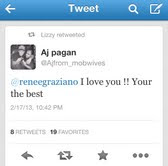 Renee was really happy that AJ agreed to meet with her in rehab to have a family session together because she wanted AJ to have a better understanding of why she can't just stop taking pills on her own. AJ says that he doesn't agree with his mom's addiction and going to rehab, but says that she's been through a lot and he feels bad for her. AJ feels that no matter how hard life gets, there should be no reason to use drugs. AJ says that he just wants her to stop and not let him down anymore. AJ explains that he's been let down by his dad and by her. AJ says that he feels that when he sees that his mom is using, she ends up sleeping all the time and slurring her speech. AJ explains that seeing his mom that way makes him feel depressed. AJ says that his way of handling it is by just leaving. AJ goes on to say that he always had to worry about his dad, Junior being in jail and his mom using pills. AJ says that when Renee uses, he can tell that she's not his mom anymore. Renee says that she's shocked to know that AJ knew more about what was going on than she thought he did. AJ says that Renee always tries to put others first and help them first, but he says that a person has to help themselves before they can help others and that's what he wants her to do. AJ wants her to get clean for herself and then for him. When the therapist tells Renee that she hasn't been able to have these kinds of talks with AJ because she's been off somewhere else self medicating, she breaks down and apologizes to him. AJ being the sweet caring son that he is, forgives his mom and tells her that now she just has to make changes. During this scene AJ tweeted his mom Renee and told her how much he loves her and that she's the best. Renee replied to AJ saying that she loved him more than anything and she thanked him for giving her a second chance. 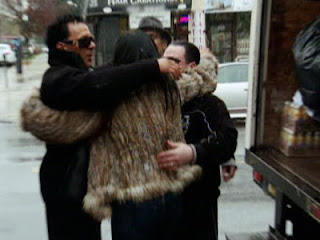 Back at the Drunken Monkey, Big Ang has everyone dropping off supplies (diapers, formula etc.). She even had some of her friends called the Bronx boys who came to deliver a big truck load of food and clothes to her. Even in a sad time like this Ang still found a way to make us laugh with one of her one liners and I loved it. She joked that things that fall off the back of a truck can come in handy sometimes. 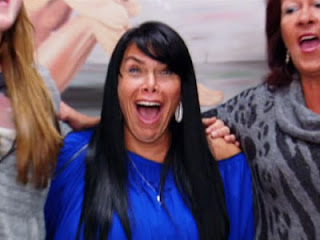 Back in FL. Renee finishes rehab and graduates. A lot of the people in the rehab were sad to see her go, but they were happy that she was graduating. It was interesting to hear what they had to say about her and what their first impressions of her were. Some of them looked at her like a mother figure while others looked at her like the baddest b**ch (in a good way). Renee says she's learned how to forgive. She's ready to come back to Staten Island and prove that nothing can stop her. We the fans are so proud of how far you've come and for completing rehab. Congrats!!! 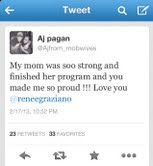 During this scene AJ tweeted to his fans how strong his mom was during rehab and that she made him proud when she graduated from the program. Renee replied to his tweet by saying that she couldn't have done it without him. The show ends with another cliff hanger (vh1 and their cliff hangers they love to keep you wanting more, kidding) when Drita invites Big Ang and Carla over to her house so that she can tell her some shocking news. Drita explains that she had gone out to run errands and Aleeya called her and was frantic but then the line cut off. Drita knew something wasn't right so she quickly went back to her house and guess who was standing at her door when she opened it......SUSPENSE...LEE was at the door..Big Ang asked the question we were all dying to know...Lee's came home??? Next week's episode is titled "No Love Loss", don't forget to watch next Sunday at 10 pm on Vh1.
Labels: AJ Graziano, Big Ang, Carla Facciolo, Drita Davanzo, Karen Gravano, Love Majewski, Mob Wives, Ramona Rizzo, Renee Graziano