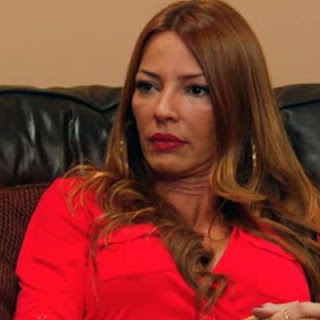 Tonight's episode of Mob Wives  titled "No Love Lost" picked up from last week's cliff hanger where Drita tells Big Ang and Carla that Lee is home. Drita said that she was shocked that he was home so soon and that he didn't tell her that he was coming home when she had just visited him with their daughters. When Big Ang asks Drita if she fed Lee when he came home and she says yes and that it was her. Drita explains that "when a man goes away its like he's been in a freezer and he comes out like a riped vegetable" (best one liner by Drita this season). I love her. Drita says that even though Lee's home, he still has to go to the halfway house for a few months. Drita asks Big Ang and Carla what they think she should do about letting Lee move back in after he gets out of the halfway house. Big Ang thinks that Drita should let Lee back in the house and give it a second chance.

Karen, Ramona and Love go to Karen's friend Toni Marie's charity art event for breast cancer together. Karen explains that Toni's ex husband was a part of her Dad Sammy's crew and that he was like an uncle to her growing up. Ramona tells Karen and Love that Lee is back in town. Karen says that she wishes him well and the best of luck. Karen hopes that Lee can stay out of trouble so that he can spend more time with Aleeya and Gizzelle. 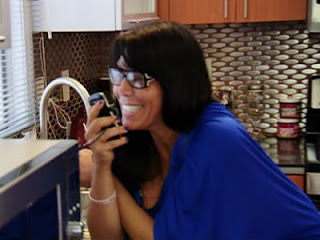 Renee returns home from rehab feeling really good and happy to be back with her family in time for the holidays. When Renee calls Drita to let her know that she's back home, Drita's so excited for her and she feels like things are going to be good for her. When Drita fills Renee in on Lee being home, Renee's really happy for her. Renee says that Drita just needed Lee to come home from jail in order for her to realize that she should be back with him. Renee tells Drita that she wants to get together with everyone to catch up. 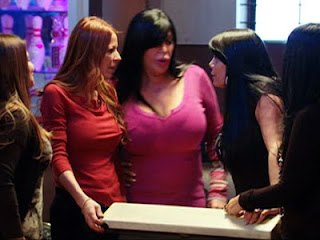 When Renee goes bowling with Big Ang, Ramona, Karen and Drita, they're all very glad to see her and that she's home from rehab. Big Ang was the best at throwing the bowling ball. I love her. Even Drita said she's never seen someone throw a ball like Ang does (who was over four years old). Renee tells the girls how rehab went and that she bowled a lot when she was in rehab which is why she's so good playing against them and ends up winning. Renee tells the girls that she learned that she had anger problems, they joke with her and tell her that they could have told her that. When Renee asks what she's missed out on since being away, Drita tells her that everyone's getting along (well everyone but her and Carla that is). Renee says that a year ago everyone was pulling each other's hair out and now they're all bowling together. It was so good to see Renee happy and having fun with everyone and all of them getting along. 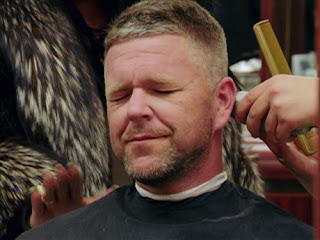 Big Ang takes her husband Neil to get a makeover. He gets a new haircut and shaves a little. I love these two together, they're so cute and funny together. Big Ang says that all women should have a tight leash on their men and maybe choke them a little (best one liner of Big Ang). 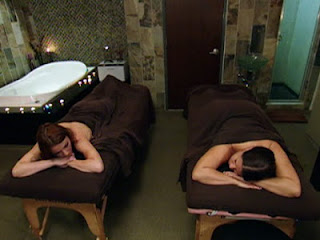 When Karen and Drita are invited to go on a spa day with Ramona and Renee, Ramona and Renee don't show up. When Drita fills Karen in more about Lee being home.Karen says that she hopes that Lee doesn't go back to jail and that he's there for Drita and his daughters because she knows he how much he loves his family. It was nice to see Drita and Karen hang out and be friends again because I've always liked these two. My favorite part of this scene was when Karen said that it was good that they could lay down willingly and not lay each other out, I love this girl. 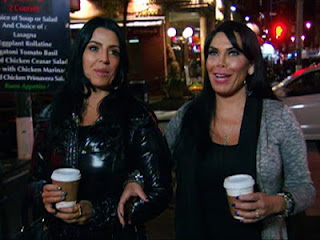 Ramona and Renee decided to go to little Italy and hang out for the night instead of going to the spa. The two talk about Ramona's grandfather and Renee's dad being good friends. On this particular night out, it happens to be the one year anniversary that Renee's dad went back to jail. Ramona brings up that it's also coming up on the anniversary of her grandfather's death. Ramona suggests throwing a memorial for her grandfather with just her close friends. She wants to remember him with happy tears not sad tears every time his anniversary comes around.

Carla and Big Ang go shopping for light bulbs and Carla asks for Ang's advice on what she thinks about getting full or joint custody of her kids with Joe. Ang thinks that Carla should get full custody of their kids not joint custody because Joe's the one who left. Ang says that she's old school and women in this lifestyle take care of the kids on their own when their husbands are away so they should get full custody of the kids if the husband decides to leave the marriage. 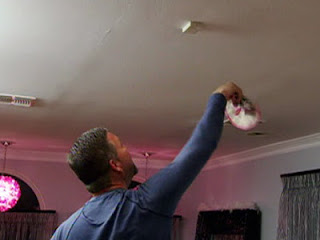 When Neil makes a romantic dinner for Ang, he sets off their smoke alarms. The best part of this scene for was when Neil was on the phone with his friend asking how to cook broccoli. Poor Neil he tries so hard to cook for his wife and he almost burns the house down. These two need their own show. Maybe "Big Ang and Neil Show"? 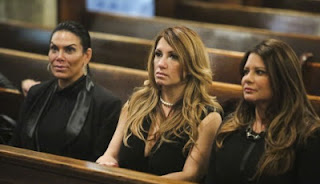 When Ramona has a memorial for her grandfather Lefty, Renee, Love, Big Ang, and Karen show up for it. Renee and Karen both speak about what a wonderful guy Lefty was. Love remembers when Ramona's grandfather passed away and she knows how much Lefty meant to Ramona. Ramona explains that when she came back home, there were some people who knew her from who her grandfather was and they welcomed her with opened arms, but others like her dad didn't. Renee explains that they all share an unbreakable bond together from birth to death. 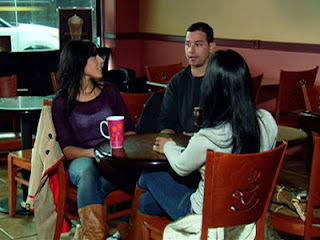 Carla finally meets Joe's girlfriend, Raquel for the first time at a cafe. Carla feels that she needs to meet Raquel so that she knows that her kids are safe when they're staying with her and Joe. Joe says that he waited three or four months before he let Raquel meet his kids. Carla feels that it wasn't anything personal about Raquel  that she didn't like, but it was just that mother instinct of her wanting to protect her kids and make sure that they were safe. Carla explains that she just didn't want Joe bringing hoes in his house around their kids. Carla feels better after meeting Raquel and feels more comfortable with her kids being around her. 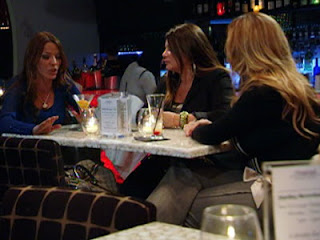 Karen and Love meet Drita for drinks where they talk about Love's issues with Carla. Love says that Carla is twelve lbs and that she's gonna hit her and she'll fly through the wall. Drita agrees with Love. Karen says that she's heard that Carla's talked about her, Renee, and Ramona so obviously there's something that Carla has a problem with. Drita says that she doesn't want to be in the middle of Love and Carla's issue. Drita says that she's concerned about this because of what happened between Renee and Carla when Carla picked up a knife. Love says that Carla's not gonna do that to her and if she does try to then she's gonna leave stabbed. Drita jokes with Love and says that she might want to just stay home. I gotta say I'm with Drita on this one. I'd be a little afraid of Love myself (I'm kidding I love LOVE and her one liners). Be sure to watch next week's episode of Mob Wives titled "Time and Punishment" at 10 pm on Vh1.