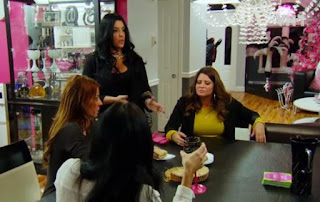 Tonight's episode of Mob Wives titled "Mama Drama" was definitely about that. The show began at Big Ang's Christmas party with Drita, Ramona, Karen and Carla (who showed up a little late). I don't know what it is with these dinner parties/sit downs that Ang has, but every time I watch them all I do is look at how good her food is. I mean, we all know that this girl can cook some good food, but tonight's episode with the lobster....omg love I it. I had to re watch that scene to know what they were all talking about. In the beginning Big Ang tells them that Love isn't coming because she's sick and Renee isn't coming because she doesn't feel comfortable being around Carla after the last brunch that Ang had where she called her a junkie. When Carla arrives, she says that she was happy that she didn't see Renee there. Everyone could feel the tension at the Christmas dinner. Ang decides to take the knives away from the table to be on the safe side in case any fight breaks out between the girls and Carla. Karen decides to break the ice by telling Carla that she didn't like the way that she attacked Renee with her drug problem and started swinging the knife around. Carla says that she didn't pick up the knife and wave it in Renee's face at the brunch. When  Ramona tries to explain to Carla that she should be compassionate towards Renee about her drug problem. Carla says that she doesn't care about Renee anymore. Ramona asks Drita for her opinion about what she would do if someone put a knife in her face, Drita says that she would have put it down their throat. Ramona is surprised by Drita's response and is actually starting to take a liking to her. When Karen asks Carla if she would be willing to sit down and apologize to Renee for calling her a junkie she said only if Renee would apologize for what she said to her. Carla then says that Renee should be thanking her because if she didn't call her a junkie then she wouldn't have had a reason to go rehab. Karen doesn't believe Carla and thinks if she cared then she would have been there and given Renee a second chance. Karen leaves conversation early with Ramona because they have an early flight to Arizona the next day so she can see Dave. 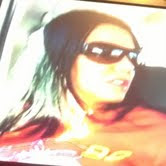 Karen and Ramona arrive in Arizona to find out what's been going on with Dave and his "Becky Butana". I love Ramona's names for people. Ramona tells Karen that she should prepare herself for walking in on Dave and Becky at her house. Karen says she's sick of guess what, guess who, guess when about Dave's girlfriend. 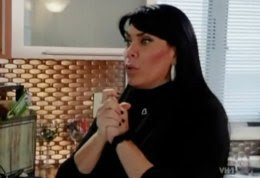 Renee invites Drita, Love, and Big Ang over to go on a road trip with her, but doesn't tell them where they're going until they get to her house. When Renee tells them that they're going to get her an attack dog to keep her and AJ safe in their new home, Drita jokes that the dog is going to go crazy with her because of how much she yells when she talks. Love says that she's the attack dog in her house and anyone who tries to attack her in her house they're leaving with no body parts attached to them. 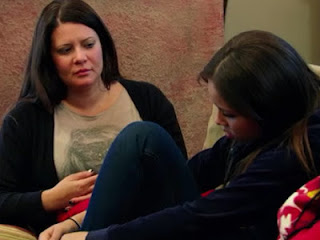 When Karen's daughter Karina comes home from school, Karen asks her about when Dave's coming home. Karina then tells Karen that she doesn't like her substitute teacher and that she told Dave's girlfriend about it instead of Karen. When Karen asks Karina why she didn't tell her about her problems with the teacher, Karina tells her to stop over reacting to it. 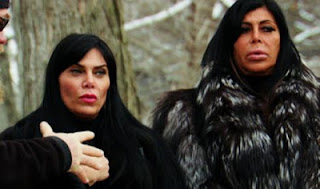 After a long drive to "hillbilly land" Renee, Big Ang and Drita finally arrive at their destination where Renee is hoping to find the right attack dog that will keep her and AJ safe in her new home. Renee explains to the owner that she wants a dog that will kill. When the owner lets the dog loose to show them how aggressive he is, Drita stays far away from it and says that Mr. Cujo is in a bad mood today (funniest line from Drita in this episode) and that German Shepherds can sense when you're afraid of them. Then she says that her red headed self is sh*tting her pants at how scared she is of the dog (another funny line in the show that Drita said). Trust me I would be doing the same thing too if I was Drita. 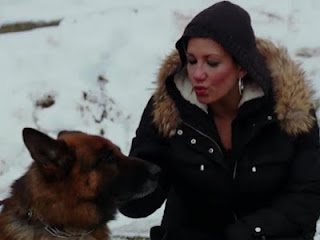 None of the girls seemed to get along too well with the dogs except for Love. When the owner tells Renee that it would cost $15,000 to get one of those dogs, she has to think about it for a while to see if she can afford it. 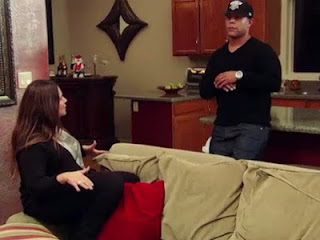 When Dave comes home he's surprised to see Karen there. Dave says that he came over to check on their dog Ozzy. Karen wants to know why her house looks like he hasn't been living there. Dave says that he hasn't been living there and that he only comes over to take care of her dog. Karen asks Dave why he didn't tell her that he wasn't living there anymore and he says that he didn't feel like he had to tell her. Karen then tells Dave that she should rent the house out if he's not going to be living there. Dave tries to keep his cool with Karen and starts blaming him being in jail and not getting phone calls and jail visits for why he's so laid back all the time. Karen then tells Dave that she wants to meet his girlfriend. Dave agrees with Karen and sets it up for the two to meet. 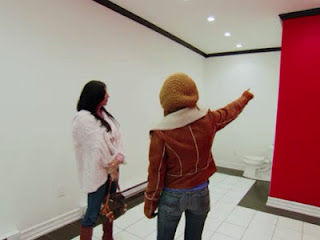 Drita takes Carla to see her new make up store that's across the street from the Drunken Monkey. On the way to the store Carla tells Drita that she's having a small getting her friends together for her birthday and is inviting Drita and Big Ang. When they get to the store, Drita explains that Ang's brother has been helping her redo the building by painting it. 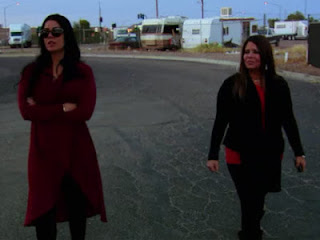 Karen takes Ramona to show her where her dad had his pool business. Karen explains that when the feds were plotting to kill her dad, they had planted a bomb at the stop sign at the end of the building of his business. Karen explains that while her dad was trying to turn his life around; she, her brother Gerard, her dad, and Dave all got arrested in an Ecstasy ring. Karen says that Dave and Gerard's prison time got cut in half and her dad took the rap for all of them. 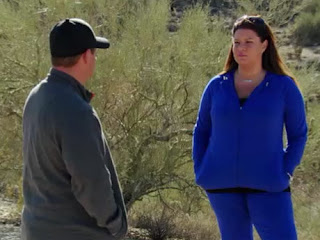 Karen meets with her brother Gerard about some news that he's found out about their dad. Gerard tells Karen that he's found out that they can get their dad out. Gerard explains their dad signed a contact that says that he was only supposed to do 15 yrs in prison with an upward departure that gives him 20 yrs, but somehow he was never notified that he was getting the upward departure. Gerard says that he has all the information for Karen to research. Karen says that if they can prove that they never got the upward departure for the extra five years that their dad is serving, then he could be out as early as tomorrow. Karen says that they want to challenge the upward departure and file an appeal on it. Karen feels that they gave her dad more time for being Sammy "The Bull". Don't forget to watch an all new episode of Mob Wives titled "Desert Storm" next Sunday at 10 pm on vh1.
Labels: Big Ang, Carla Facciolo, Drita Davanzo, Karen Gravano, Love Majewski, Mob Wives, Ramona Rizzo, Renee Graziano