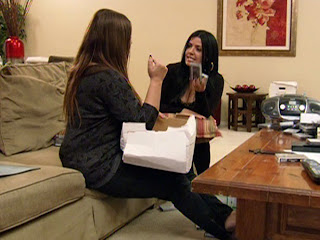 Tonight's episode of Mob Wives titled "Desert Storm" began with Karen and Ramona going to a storage where Karen's brother Gerard had some of their dad's tapes that had hours of recorded phone conversations from jail stored at. As she goes through many boxes, Karen realizes that she needs to dig deeper and find out what's on all of the tapes of recorded phone calls that were between her family and her dad while he was in jail. The purpose of Karen going through all of these tapes is so that she can try to prove to the government that her dad was supposed to only get fifteen years in jail instead of twenty years. Karen feels guilty that her dad is spending more time in jail than he should be because he took the rap for her, Dave and her brother when they got caught in an Ecstasy ring. Ramona tries to tell her that her family forgave her for it and moved on from it therefore, she should too. 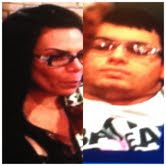 When Renee goes into AJ's room to tell him that she wants to get an attack dog, he wants to know how much it costs. When she tells him how much, he jokes that he's gonna slap her. Renee also tells AJ that she going to Krav Maga which is a self defense class and she asks if he wants to go with her. AJ says that he doesn't want to go with her. Renee says that they're suppose to be rebuilding their relationship after rehab and start doing mom and son stuff. AJ says that doing "Jackie Chan stuff" such as Krav Maga isn't really considered doing mom and son stuff. AJ says that he'll go eat with his mom, but she says that's what he wants to do. Renee wants to do something that they both want to do together. Renee says that she wants to take Krav Maga class so that she can learn how to protect herself if anything was to happen to her while she's alone in their new home. When Renee says that she ever gets attacked, AJ jokes with her saying "by what a bear". You gotta love this kid with his one liners, he's hilarious. Renee thinks that AJ makes light of things that are very serious to her. She tries to tell him that she needs feel protected. AJ says that nothing has happened to her since they've moved into their new house and that she needs to loosen up a little bit. Renee says that usually she would take XANAX to loosen up, but now she has to find a new way feel relaxed and safe. When AJ jokingly kicks his mom, she fights back and the two wrestle with each other. These two are so funny together. 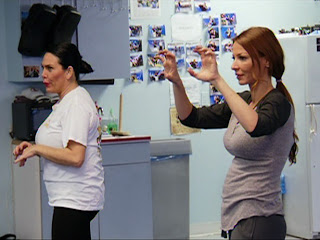 Since AJ wouldn't go with his mom to Krav Maga, Renee decides to take Drita with her. When the instructor starts to explain about how to beat someone up by using their claws on their opponent's face, Drita starts to like this class. In the beginning, Renee doesn't look like she's into it that much (because every time they tell her to throw a punch she apologizes and feels bad for hitting them), but then she starts to get the hang of it by kneeing her opponent in the cup and she starts to enjoy it. Renee says that she learned how to put people asleep without Ambien, Lunesta, or XANAX so people should be careful. 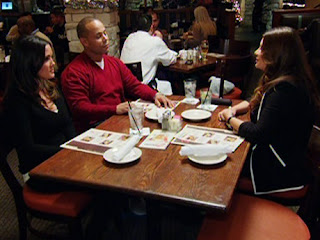 When Karen finally meets Dave's girlfriend Rebecca things get quiet. Did anyone else notice how much these two look a like? They're both moms, they both have dark hair, and they're both Italian. The only difference between the two is that Rebecca ran track in school while Karen shop lifted and robbed cars. When Karen starts to get to know Rebecca, we learn that she's a mom of two kids (one of which goes to school with Karina) and that she took Karina to the doctor without telling Karen first. Karen was upset about the doctor issue and makes it clear that she's still the mom in Karina's life and wants to know about everything that's going on with her. Karen seems to have respect for Rebecca after she starts to get to know her a little more. Karen even invites the two to a party that she's having with her Arizona friends. 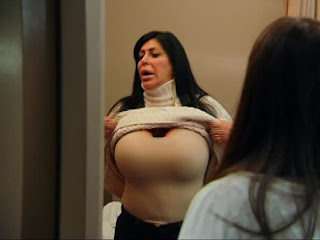 When Big Ang goes with Love shopping to buy lingerie  for Love's ex boyfriend Fate who's coming to town they both have to measure to see how big their boobs are. For the record, Ang is a J (for jumbo) and Love is a G (for gangster). When Love tells Big Ang that she's still hearing on the island that Carla is talking trash about her, Big Ang doesn't know what she's talking about because she hasn't heard anything. Love says that she needs to nip this in the butt and talk to Carla. 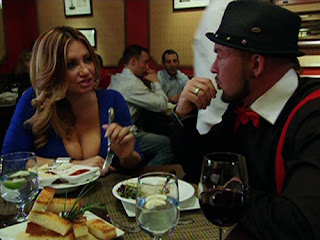 When Love has dinner with Fate, she's excited to see him because she hasn't seen him in years. Out of all the guys that Love has introduced us to on the show, this one seems pretty cool and has a very unique style to himself. I didn't even know bow ties were back in style but he pulls it off pretty well. When the two talk about the past and how she ran away from him and he had a child on the way from a previous relationship that he was in before he met Love. Love regrets not giving Fate a chance and he says that hurt him when she left. Love says that Fate was the one guy that got away from her so this time she wants to try and make it work with him. Love says that Fate needs some Love in his life. 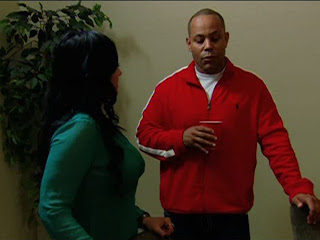 At Karen's party, everyone's surprised that Dave and Rebecca showed up. It's not everyday that you invite your child's dad and his girlfriend to a party that you're having (unless its your kid's birthday party and they're having it at chuckie cheese). Karen was very brave to do that and I think she handled it well. Ramona grills Dave about his relationship with Rebecca and wants to know whats really going on between them. Ramona still believes that Dave's in love with Karen and she even tries to get Dave to admit it too which he does. 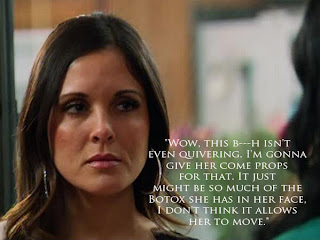 After Ramona is finished with scolding Dave about his relationship with Rebecca, she doesn't stop there. Instead, she moves onto to Rebecca and wants to get her side of the story about her relationship with Dave and his daughter Karina. Forget about being afraid to meet the baby's mama. I would be afraid to meet the baby's mama's cousin. I mean Ramona's tough on these two, and she should be. When Ramona confronts Rebecca about what happened when she took Karina to the doctors without Karen's permission, Rebecca says that she was told that Dave already told Karen about it and that she was fine with it. Rebecca said that she found out later that Karen never knew about it and that didn't well with her because she wouldn't want someone to do that to her kids. In the end, Ramona seems to be ok with Rebecca and tells her if there's ever a problem with Karina to just call Karen first. 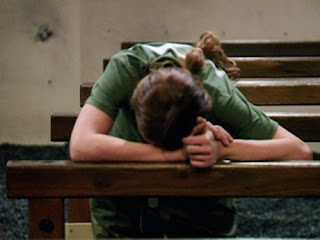 Drita decides to go to boot camp to get back into shape. Little does Drita know, her drill Sargent is tough and makes her work hard. Drita jokes that she went from beating up people to lifting logs in boot camp. If I was Drita I would have stuck with Krav Maga with Renee because this boot camp thing looks way harder than that. 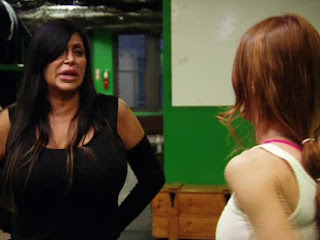 When Big Ang stops by the boot camp to pick up Drita to go shopping, the conversation turns into Love vs Carla. Both Drita and Ang are tired of hearing Love talk about how much she hates Carla and feel like they need to tell Carla what's going on. They both agree that Love and Carla need to talk one on one because it's getting worse. Drita says that Carla doesn't understand that she needs to prepare herself for meeting with Love because she's going to rip her to pieces. Don't forget to watch next week's all new episode of Mob Wives titled "Winging It" at 10 pm on vh1.
Labels: AJ Graziano, Big Ang, Carla Facciolo, Drita Davanzo, Karen Gravano, Love Majewski, Mob Wives, Ramona Rizzo, Renee Graziano