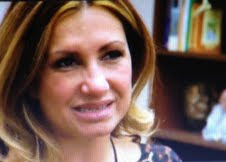 Tonight's episode of Mob Wives titled "Winging It" began with Love going to see her neurologist who treated her from when she had a car accident a few years ago and suffered a head injury. When her doctor asks her if she's sensed any short fuse or bad temper and she says yes. She then explains to him an incident that happened where she flipped out on someone and blacked out. The reaction on the doctor's face as she's explaining the incident to him was priceless. The doctor tells her that the head injury that she had in her accident could have caused her to have PTSD and Post concussion syndrome that makes her black out and have a bad temper. 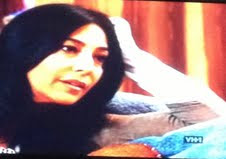 When Drita goes to Carla's to talk to her about the Love situation, Drita tells her that Love hung out with Carla's boyfriend. Carla says that her boyfriend was with Love for a month, but that was way before he got with Carla. Carla thinks that Love is jealous of her and that's why she's talking about her. Carla says that she doesn't care if Love is talking about her because she doesn't know who she is and has never met her  before. 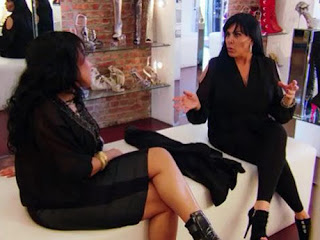 Renee goes to see her friend Jiton who owns a shoe store in Brooklyn. Renee tells Jiton that she wants to develop a shoe line called Mob Candy. Renee says that she wants it to be a shoe design that'look like the shoes that she wore in the lifestyle growing up (glamorous and over the top like her personality is). When Big Ang goes to visit Drita at her cosmetic store Drita tells her about the Love and Carla situation. They're both tired of the situation and feel like they're in the middle of it because Carla and Love are both of their good friends. Drita then calls Lee to see if he can get one of his friends to install a security camera in her store so that she can see what's going on there when she's not there. Big Ang jokes and says that Neil is good at drinking beer and taking out the trash, but nothing else.

Ramona goes with her daughters to see a wedding planner. She explains that when her boyfriend Joe gets out on bail to for a week to get married, he would have to have two armed guards with him at the wedding and be on house arrest. She also explains that she would have 48 hrs notice of when he would be released so basically its a shot gun wedding at their home. 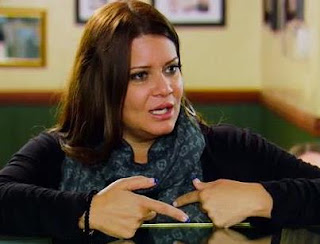 When Karen goes to visit her cousin Rena at her pizza place she tells her about her dad's plea and that she wants to reopen the case. Rena's dad and Peter Gotti supposedly came after Karen's dad while he was in Arizona to kill him. Karen says that her biggest fear about reopening her dad's case is that they put him back behind bars to do more time.

Carla goes to get a facial by her-wait for it- ex father in law Dr. Ferragamo. As if this scene isn't awkward enough to have your ex father in law do a facial on you, things get even more awkward when the ex father in law's son Joe stops in to see how she's doing during the procedure. Carla says that she takes care of herself and doesn't need to worry about talking about the other girls and that maybe Love has no life and that's why she feels the need to talk about her around town.

Drita meets with Love to get her nails done. Drita tells Love that she met with Carla to tell her what Love said about her. Love says that Carla took her business logo of angle wings that she has tattooed on her wrist and used it for Dr. Ferragamo's business. Drita asks Love if she would meet with Carla to talk and she said she would, but that she better be prepared to own up to the stuff that she's said about her. 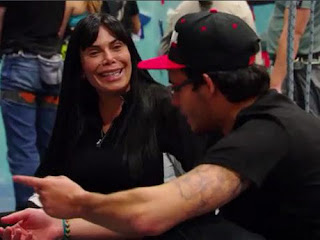 Renee and AJ go rock climbing to spend quality mom and son time together. When Renee explains to AJ about her new shoe line business adventure with Jiton, she tells him that she's hoping that she will be able to provide for the both of them better now with this new business adventure. AJ tells her that although his mom won't have to worry about being financially stable for them anymore with having the new Mob Candy shoe line business, he tells her that he wants to go off and make his own money without having to rely on her so much. Renee says that AJ's picked up the pieces when things got bad for them, supported her when she went to rehab and now he wants  to become more responsible and make money on his own. Renee says that she's so proud of him. I think we can all agree that with everything Renee's been through, she really did a great job raising her son. Renee also talks about how she's been doing with her recovery and AJ says that she's doing really good and that he can see the difference in her. 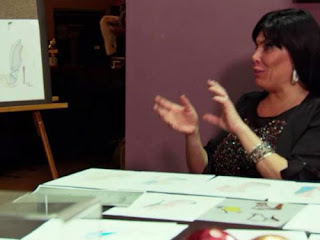 When Renee goes to check out the progress of her Mob Candy shoe line, she's so excited to see some of the shoe designs. She even suggests more ideas for Mob Candy shoes that they show her such as, having the option of picking out your own heel color for the shoe by screwing it on and off by yourself. These shoes looked so cool. They even had a Renee shoe that was totally her, black with feathers. There was one shoe that Renee wanted to name "The Ramona shoe" because it was firey like Ramona's personality is. 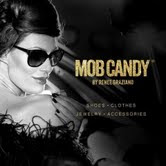 My personal favorite shoe was the black one that had sparkles coming down on it. Renee feels that she's more focused than ever (being that she's clean and sober in her recovery) to get this shoe line started. Be sure to go to mobcandystore.com to buy shoes, clothes, jewelry, accessories by your favorite HBIC Renee and get mobbed up. Way to go Renee! 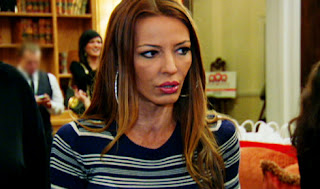 Carla has a wine party where she invites Drita and Big Ang. When Drita tells Carla what Love said about her stealing her logo for Dr. Ferragamo's business, Carla says that she never knew Love had a business and doesn't know what she's talking about. Carla says that Dr. Ferragamo went on the internet and drew the logo himself and didn't steal it from Love. Carla then says that every time Drita comes back to her with another crazy story from them it's crazy. Drita asks if Carla would want to talk to Love about it and she says yes. Drita says that she's afraid that Carla's gonna get into the same kind of fight with Love that she got into with Renee. Drita warns Carla that Love has a bad temper. Be sure to watch an all new episode of Mob Wives next Sunday at 10 pm on vh1.
Labels: AJ Graziano, Big Ang, Carla Facciolo, Drita Davanzo, Karen Gravano, Love Majewski, Mob Wives, Ramona Rizzo, Renee Graziano