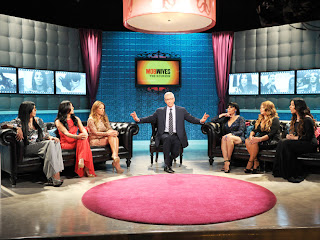 Its the moment we've all been waiting for. After two long weeks from seeing the Mob Wives season 3 finale we were all very excited to watch the reunion. I gotta say, although vh1 changed the time slot (for the second time this season) from 8 pm to 10 pm to 9 pm I honestly think this was the best decision that vh1 made because while the reunion aired it was the number 2 and 3 most trending topic on twitter during the entire hour. Some fans were upset that it wasn't two parts like last season, but others like myself, didn't care because the show was the most talked about on social media tonight. I gotta give it to Dr. Drew (who I'm a fan of personally) for trying to keep the peace amongst the women during the show. Among the topics that were discussed at the reunion were, racism, fathers, uncles, and grandfather (who killed who and who ratted on who), and the million dollar question of them all where's Love? The first topic at hand was the Love situation. Dr. Drew said that "it was decided that Love part ways" from the show and that's why she was not there at the reunion taping. Ramona says that Love was a psychopath which everyone knew about from watching all season. Drita says that Love was semi mental, but she can't judge her for that because as she jokes Drita herself is in recovery from flipping out on people. When Dr. Drew asks Drita if she thought what Love did to Carla during the fight was right she said no. 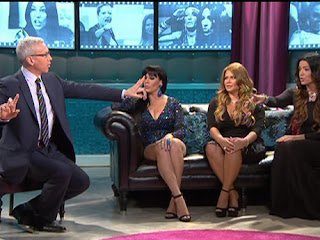 Carla and Ramona get into it over their uncles and husbands. Ramona also called Carla a cop caller. Ramona said that Carla calls black people "you people". Ramona also said that Carla always calls everyone on the show "these girls". Carla said that's because they all had a problem with her. Renee says that she's good with Carla calling her "one of those girls". Karen said that there was a situation between Carla's uncle and her dad "Sammy the Bull". Carla feels that they all set her up with Love at the party. Drita said that Love told her that she didn't want to go after Carla because she was going to go after her. Big Ang said that the fight made her upset because Carla had blood everywhere on her. Big Ang also jokes that all she wanted was the cake and they never got to that part because the fight broke out. I gotta say out of all the parties that these ladies have, the only ones where they get to eat the cake is when its their kids birthday party. Big Ang says that Love was wrong and Drita said that Love shouldn't have came to the party if she was going to attack Carla. Renee said that Love wasn't wrong with getting in Carla's face but that she can understand the finger thing. Leave it to Big Ang to remind us what was really important at the party...the cake. 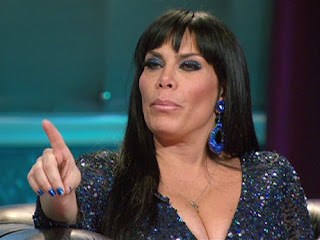 When Dr. Drew brought it the issue between Carla and Renee about the butter knife, Carla says that she wasn't going to stab Renee. Big Ang jokes that she more concerned about her china cabinet and her silver ware during that fight at her brunch. Carla said that the story about her sleeping with married came from when she was in her 20s and she dated a guy who she didn't know was 100% married. Renee says that she's glad that Carla's owning up to that story now. 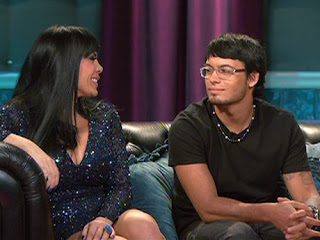 When Dr. Drew talks to Renee about how she shared her story with us about going to rehab and getting clean he asks her if Junior was responsible for her becoming addicted to pills. Renee says that she's not gonna let Junior be the one who was responsible for her being addicted to pills. Renee said that it was a lot of her having a lot of guilt about things that she's done in her past Carla apologizes to both Renee and AJ for calling her a junkie. They both accept Carla's apology. Drita tells Renee (what we have all known all along) that even though Renee might think that she's not a good mom, she reminds Renee that she is because of how good of a son she has raised AJ into being. Drita's right, AJ is an amazing kid and Renee should be very proud at the young man that he's become. 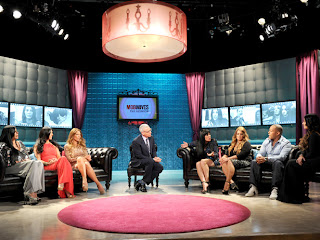 When Karen's ex Dave came on the stage he said that he didn't feel that he needed to tell Karen who he was dating. Renee tries to get him to realize that he made a mistake when saying that. In the end, he compromises with Renee and says that at the time, he didn't feel like he needed to tell Karen who he was dating, but looking back he sees that he should've told her because she's his daughter's mom. Dave said that he's never met Karen's guy Storm and he's okay with that because he knows that she wouldn't bring anyone who she didn't feel comfortable around their daughter. The only guy that wasn't present at the reunion was Carla's ex Joe. Everyone shared their opinions about him at the reunion though. Renee said that she didn't like what he did with her on the show. Some of the things that they did not bring up at the reunion (or that they didn't show us) was hurricane Sandy and how they all recovered from it.

Thank you to all the fans!! Season 4 coming soon!! And thanks to any one who is a hater....cause you make us greater!!Hope you all enjoyed
— jennifer graziano (@jenngraziano) April 22, 2013

When the show was over everyone took to twitter expressing how they wanted to see a season 4 in the works. It didn't take the show's producer, Jenn Graziano long to announce on twitter that season 4 is coming soon. All the fans really want to see all of the girls come back. We will all be tuning in to see what happens when Renee, Big Ang, Ramona, Drita, Karen, and Carla return for season 4.