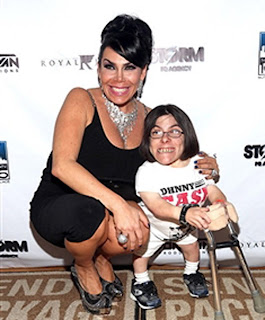 Last night tons of fans and surprised guests showed up at Renee Graziano's celebrity sit down bday dinner at Midtown 1015. I was personally invited by Renee to attend the event as her guest. Two days before this bday sit down I got a message from Renee on Twitter asking to talk to me on the phone. At first when Renee called me I had no idea what she could have wanted from me. So when I heard her voice mail say that she had a surprise for me and to call her back right away, all I thought was what could the surprise be? I never would've expected that her surprise was going to be inviting me to be her guest at her party. I was so excited to go this event.

Renee looked amazing when she came out to walk the red carpet. The party was so much fun. I hung out with Renee's son AJ who had no idea that I was even going to be there. Renee had told me before the party that she wanted him to be surprised when saw me. AJ was definitely surprised to see me. He couldn't believe that I came all the way from home to see him and his mom.

AJ's girlfriend Brittany was also in attendance. While Renee was doing press and meeting fans, I hung back in the VIP room with AJ and Brittany. These two were really fun to hangout with. AJ's the nicest down to earth kid that you would ever meet. I think he was more excited to see me than I was to see him.

Big Ang was also in there to celebrate with Renee and her fans. Big Ang was nice to talk to too. I was so happy that I got to meet her.

Some of Renee's surprised guests included Love & Hip Hop Yandy Smith, DJ DASH, Gossip Game's Vivian Billings, Washington Redskins Steven Bowen and his wife Tiffany, R&B star Mario Winans along with many more. Overall the entire night was really fun. They're fun to hang out with. The Grazianos welcomed me into the family with open arms. Thank you to Renee and Jenn Graziano for inviting me to this fun night.
Labels: AJ Graziano, Big Ang, Mob Wives, Renee Graziano