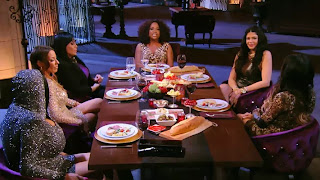 Tonight was the Mob Wives season 4 reunion hosted by Sherri Shepherd. The reunion began with Sherri asking Alicia what ended up happening with her sentencing since we never got to find out from the season finale. Alicia says that her sentencing was postponed until the restitution was settled. Next they discuss the delicious topic between Renee and Natalie. Sherri asks Renee why she thought Natalie was a mini me and Renee explains that Natalie is outspoken but that they just have their differences with each other. Renee says that she's done talking about the word delicious because it is ridiculous. 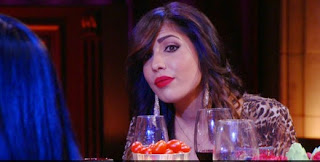 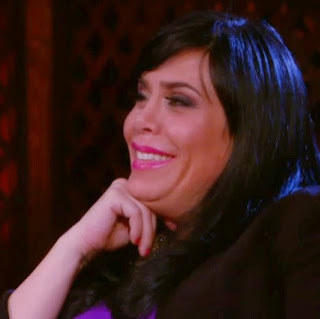 Finally they talk about Renee's book "Playing with Fire" which will be in stores to buy on April 8th. She says its she's excited about the book because it's mixed with mob, thriller. She had fun writing it. Overall it was a good season. Look for season 5 coming soon.
No comments:
Labels: Alicia DiMichele, Big Ang, Drita Davanzo, Mob Wives, Natalie Guercio, Renee Graziano 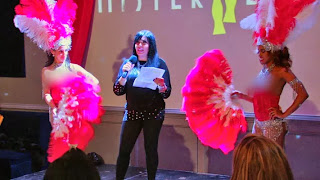 Tonight was Mob Wives Season 4 finale where it began with Renee going over to Ang's house where she showed her and Drita what she had been working on for a few months. Renee tells Drita and Ang that she has been writing a book that's fiction and that its kind of dirty. The book is titled "Playing with Fire" and Renee is planning to have a release thrown by her publicist and she wants all of the girls to come.

When Ang and Drita meet up with Natalie at Ang's house they want to let her know that Renee was pissed about what she did to her on twitter. They both agree that they want her to stop causing issues with Renee on twitter. Natalie says when Renee stops then she will stop.

Its the night of Renee's book release party and everyone is attendance. Renee reads a few lines from her book. I gotta say AJ's facial expression during this scene was the best. 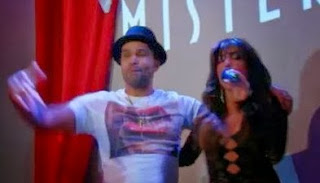 Out of nowhere Natalie decides to make the night about her instead of about Renee and decides to tell the DJ to play her song called "Delicious". Everyone including Drita is shocked that Natalie is singing and with a British accent. At this point Drita says that Renee just has to give her the look to take Natalie out. Surprisingly Renee didn't seemed phased by Natalie's antics. 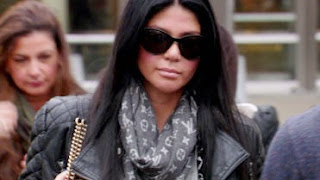 Its the day of Alicia's sentencing and everyone is waiting to see how it went. Meanwhile Renee gets a call from her friend Nikole where she tells her that one of her friends who is in jail found out that Junior got word that Renee went to see a lawyer. Renee is shocked that Junior knows this because no one knows that she went to see a lawyer but Nikole. Nikole also tells her that Junior is being released the next day. Renee is pretty shaken up by the news. When she goes to Drita's to tell her, Drita tells her that she needs to protect herself. Natalie goes to the courthouse to find out how Alicia's sentencing went. Natalie leaves the courthouse and calls Drita to fill her in. Suddenly the show gets cut off and that's the end of the season.
No comments:
Labels: AJ Graziano, Alicia DiMichele, Big Ang, Drita Davanzo, Mob Wives, Natalie Guercio, Renee Graziano

Tonight's episode picked up right where last week's left off. It was titled "Renee's Had Enough" and it began at Drita's house where she was cooking for everyone and they were waiting for Renee to show up. When Renee finally shows up, everyone is pretty quiet just eating and enjoying the food that Drita made. Eventually they finally decide to confront Renee with their issues. Alicia starts the conversation off explaining that if Renee is going around town talking about her case then that's putting her sentencing in jeopardy. Renee says that whatever Alicia thinks she's doing she isn't. Even though Alicia still doesn't know who leaked her info to the press, she now knows that it wasn't Renee or anyone else at the table. Renee says that her issues with Alicia came from her being friends with Carla. Drita steps in and says that Renee is Carla and Eddie's friend first not Alicia's but Eddie's. Therefore, Renee's loyalty lies with them first not Alicia's. Natalie says that she was only defending Alicia because she's her friend which Renee totally understands. Drita did really good mediating everyone and helping them clear the air.

Drita is opening her second store called "Lady Boss" and she's throwing a grand opening for all the girls to come. When everyone gets there they all love it. Alicia pulls London aside because she doesn't think he's on the same page as Natalie is about their future.

Alicia writes letters with her boys to Eddie who just got sentenced. The boys miss him but they get to talk to him on the phone when he calls. Eddie calls and talks the boys and they tell him about the letters they're writing to him. 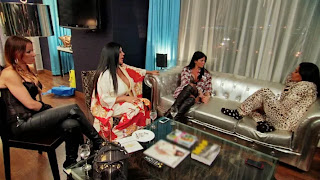 Renee rents a hotel suite in the city and is having a "Ho-Ho-Ho" party where she invites everyone but Natalie. They all show up in their PJs. Renee goes upstairs suddenly when Drita asks Alicia what she did earlier that day and she says she saw Natalie. Renee says that she doesn't want to hear about Natalie so thats why she's leaving the room. Later on Drita and Ang go upstairs to find out what's wrong with Renee and she fills them in on what Natalie did to her on twitter. Alicia feels that Natalie was out of line by telling people on twitter that Renee gives men blow jobs. Drita feels that Renee should just dead the issue, but Renee says that it can't dead. Renee's had enough. Stay tuned next week for the season finale at 9 PM only on vh1.
No comments:
Labels: Alicia DiMichele, Big Ang, Drita Davanzo, Mob Wives, Natalie Guercio, Renee Graziano 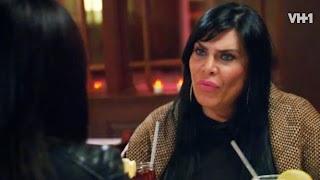 Tonight's episode began with Alicia getting ready to go to Eddie's sentencing. She's been waiting forever for him to be sentenced and the day has finally arrived find out how much time he will get. Next Renee and Natalie finally meet up to talk about the things that went on in Vegas and why Renee didn't go to her Halloween party last week. When they first sit down, Renee tells Natalie that with everything that happened between them in Vegas that its probably not a good idea for her to be a part of her Mob Candy line anymore. Natalie agrees. When Natalie asks Renee why she didn't show up to her Halloween party, she says that she didn't want to walk into the lion's den feeling like she was being set up. Renee agrees that she didn't feel like their apologies towards each other in Vegas were sincere. Renee tells her that she would like to try to be friends with Natalie. Natalie still feels hurt by what happened in Vegas and that she was disloyal to Alicia. Renee says that she only owes her loyalty to the people who she wants to be loyal to and that's it. Renee takes off because Natalie still isn't accepting her apology. 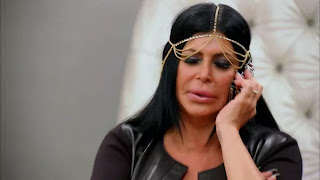 Over at Ang's house, she gets a call from Alicia about how Eddie's sentencing went. Alicia tells her that the judge accepted his plea deal and he will be home in a year and a half. Ang says that's great news and now all Alicia has to do is wait for her to be sentenced. 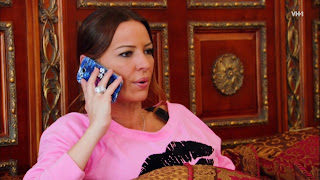 Drita is on the phone with Lee and she fills him in on how her rap song is going. She feels like she's a Brady Bunch because she's a softy now ever since Lee came home and she has nothing to rap about. She then tells him that she's organizing a lunch for all the girls so that they can all get their issues out. 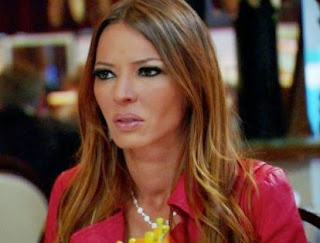 When the girls meet up for lunch that Drita set up Ang and Alicia tell Drita that Renee is not coming. Renee called Ang and told her that she couldn't make. They are all upset that Renee didn't show up. Alicia wants to talk to Renee not about Renee.

Later Drita meets up with Renee to find out why she didn't show up at the lunch with everyone. Renee tells her that since the meet up with Natalie didn't go well she didn't want to sit across from her and Alicia. Drita thinks Renee hates them both. Renee says that she doesn't care enough about them to hate them. Drita says that she wants to do dinner at her house with everyone and insists that Renee come. Renee says she will.

As Drita is making dinner for the girls, she's really hoping that this time Renee shows up. When everyone gets to Drita's, no one has heard from Renee so they're not sure if she's gonna show up or not. Meanwhile, Renee's on her way to Drita's and even though she's not looking forward to seeing everyone she's gonna show up anyways. The dinner gets cut off to next week's episode. Don't miss next week's all new episode of Mob Wives Thursday at 9 PM.only on VH1.
No comments:
Labels: Alicia DiMichele, Big Ang, Drita Davanzo, Mob Wives, Natalie Guercio, Renee Graziano
Newer Posts Older Posts Home
Subscribe to: Posts (Atom)