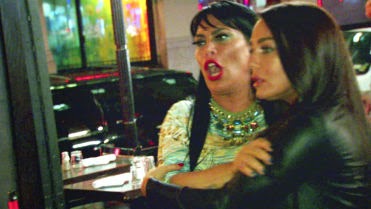 Tonight's episode of Mob Wives titled "Philly vs. Philly" began with Ang & Renee fighting at Drita's magazine party. When Ang calls Renee a rat all hell breaks lose. Ang goes after Renee like Godzilla. Nat D. & Karen try to hold Renee back while Drita and the film crew try to hold Ang back. Karen tries to tell Renee that Ang didn't call her a rat, but that she said Junior was a rat. Either way, it wasn't right what Ang said. Renee had every right to go after Ang. I'm on Renee's side with this one. Can we just talk about how Nat D. immediately went to Renee's side to calm her down? Remember, this is her first time meeting everyone. So she doesn't know them well enough to pick a side. However, in this scene it shows that she has Renee's back in this scene which is good because we love Renee too. Drita gets in a car with Ang and drives off. Meanwhile, Karen & Nat D. try to calm Renee down as they try to get her in another car. Karen feels that its sad that an outsider such as Guercio comes in between their circle. This group has never been divided like this before.

Over in Philly, Guercio is training London how to work at her family's funeral home. London shows her that he knows what he's doing when it comes to setting up everything for a funeral that is later in the day. There's not much to talk about here except for that this is just a really creepy scene working with dead people. So lets move on. 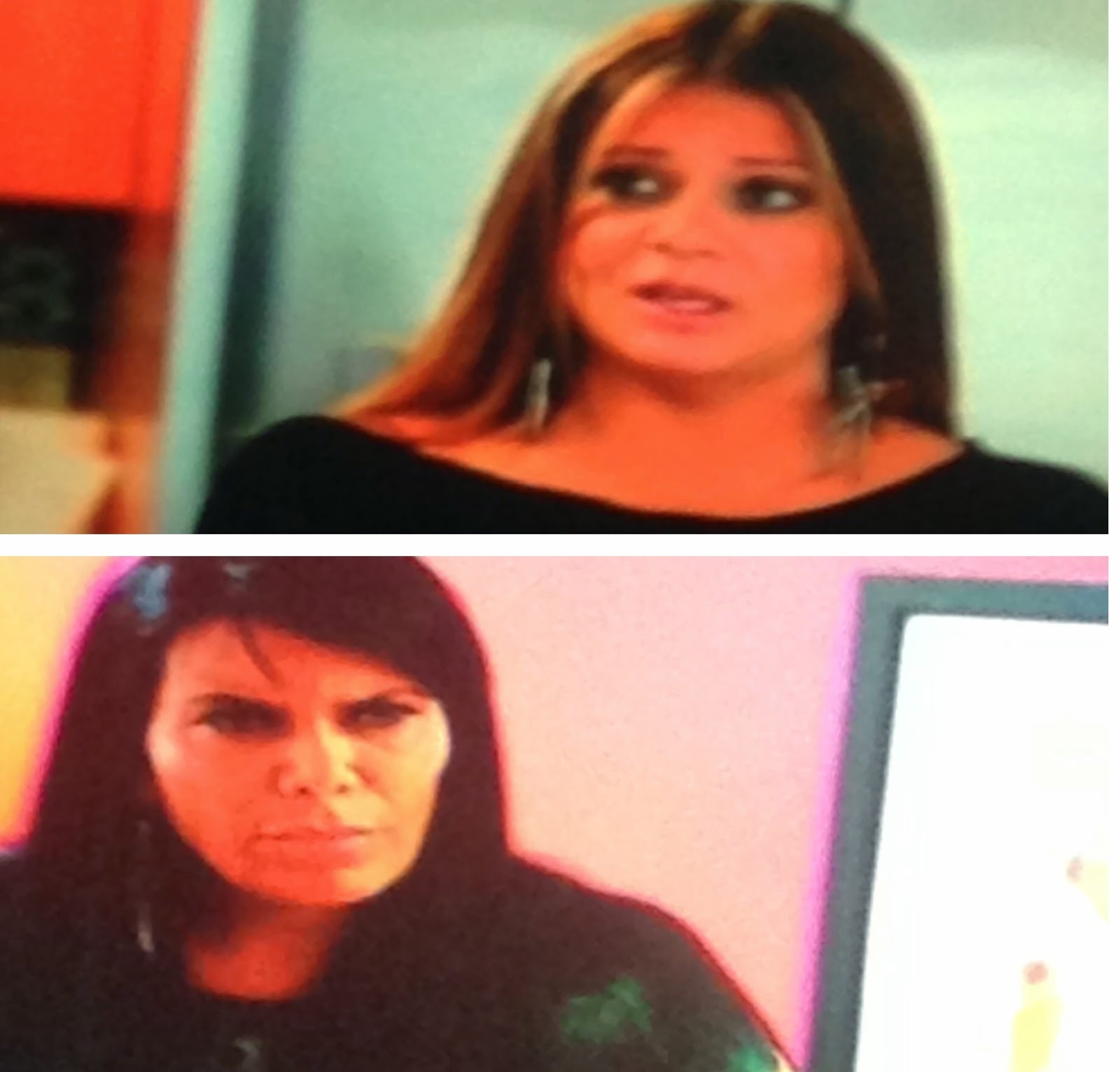 Next, Karen goes over to Renee's to see how she's doing since the fight between her & Ang. Renee is still pissed that Ang called her a rat for what Junior did. Renee gets what Junior did to her & her dad, but that doesn't excuse Ang for calling her a rat. Renee thinks that Ang is mad that Junior put her cousin away. Karen feels that Ang was out of line and she wants to hear her side of the story. Renee feels that Ang already picked a side (which is Guercio's) therefore, she should stay there. 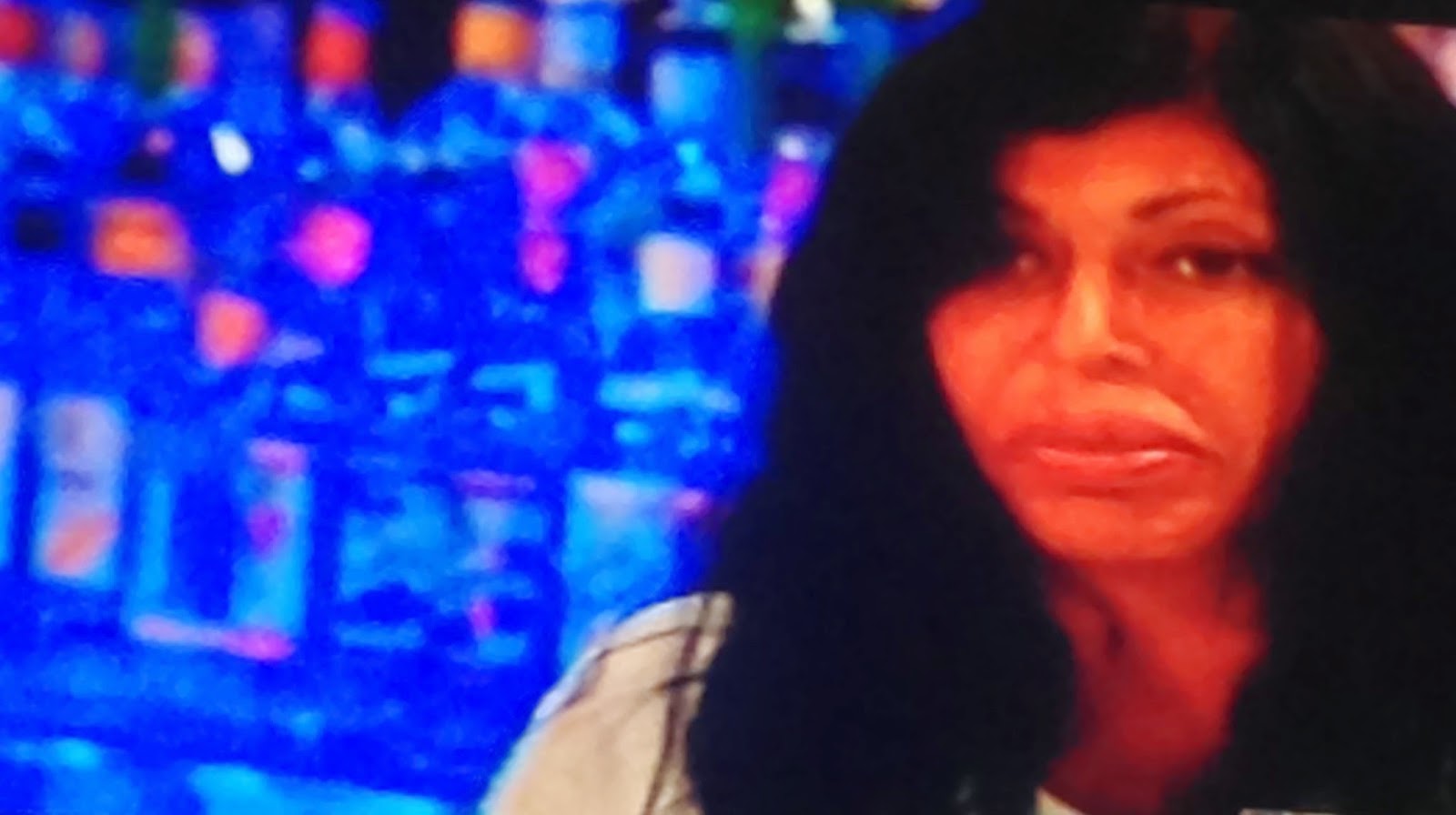 Meanwhile, Drita goes to visit Ang at the Drunken Monkey to check on her to see if she's calmed down from the fight between her and Renee. She hasn't. Ang feels bad that the fight ruined Drita's party. Ang feels that Renee went too far and she can't stand hearing about her. Drita suggests that they all get together to talk it out. Ang agrees, but tells Drita that she doesn't want Karen to get involved between her & Renee. Drita tells Ang that she's going to be on  her side & Karen is going to be on Renee's side. 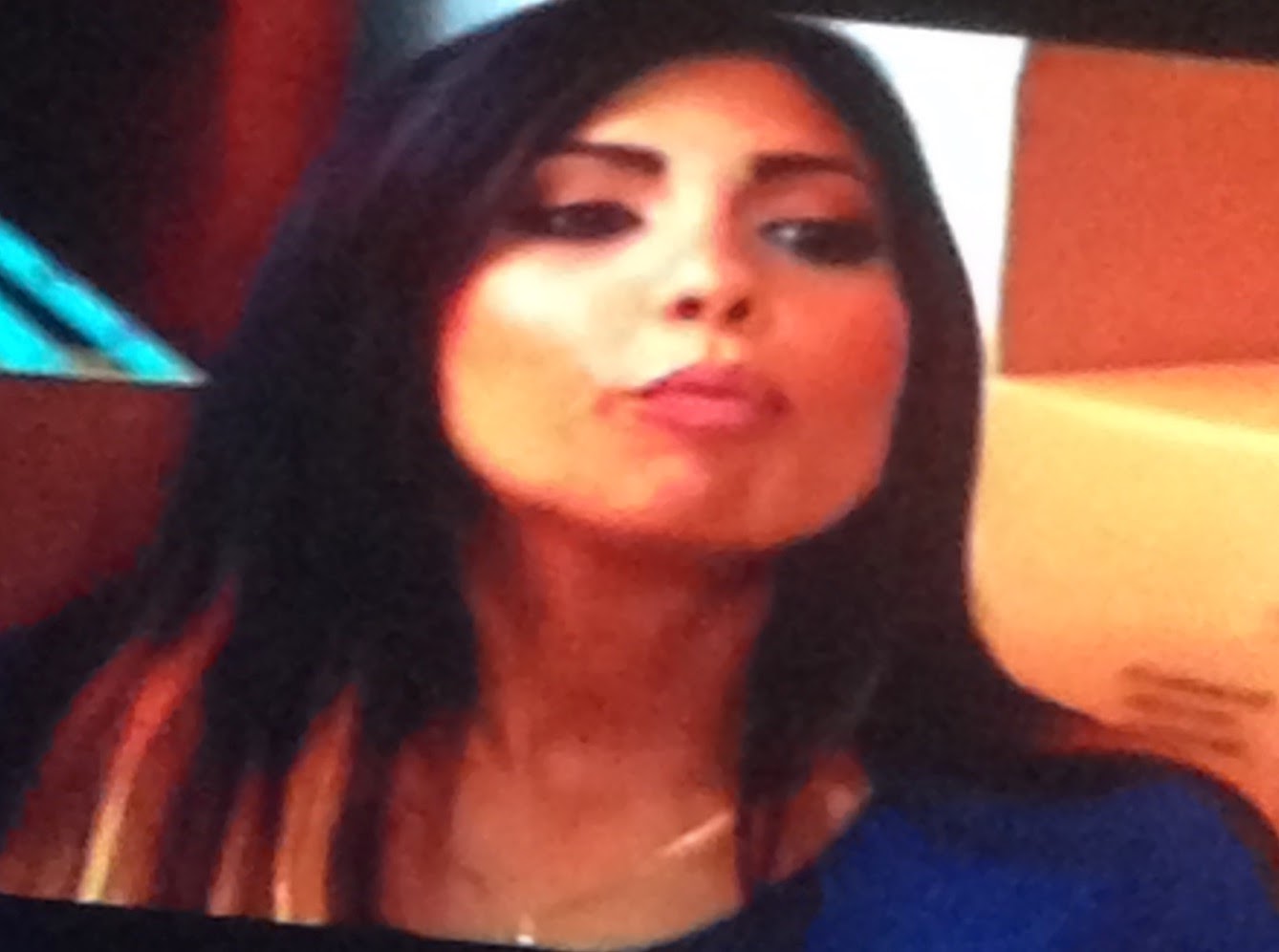 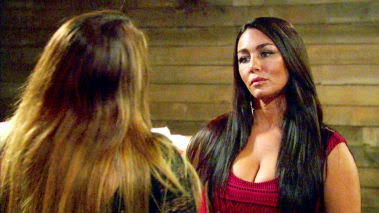 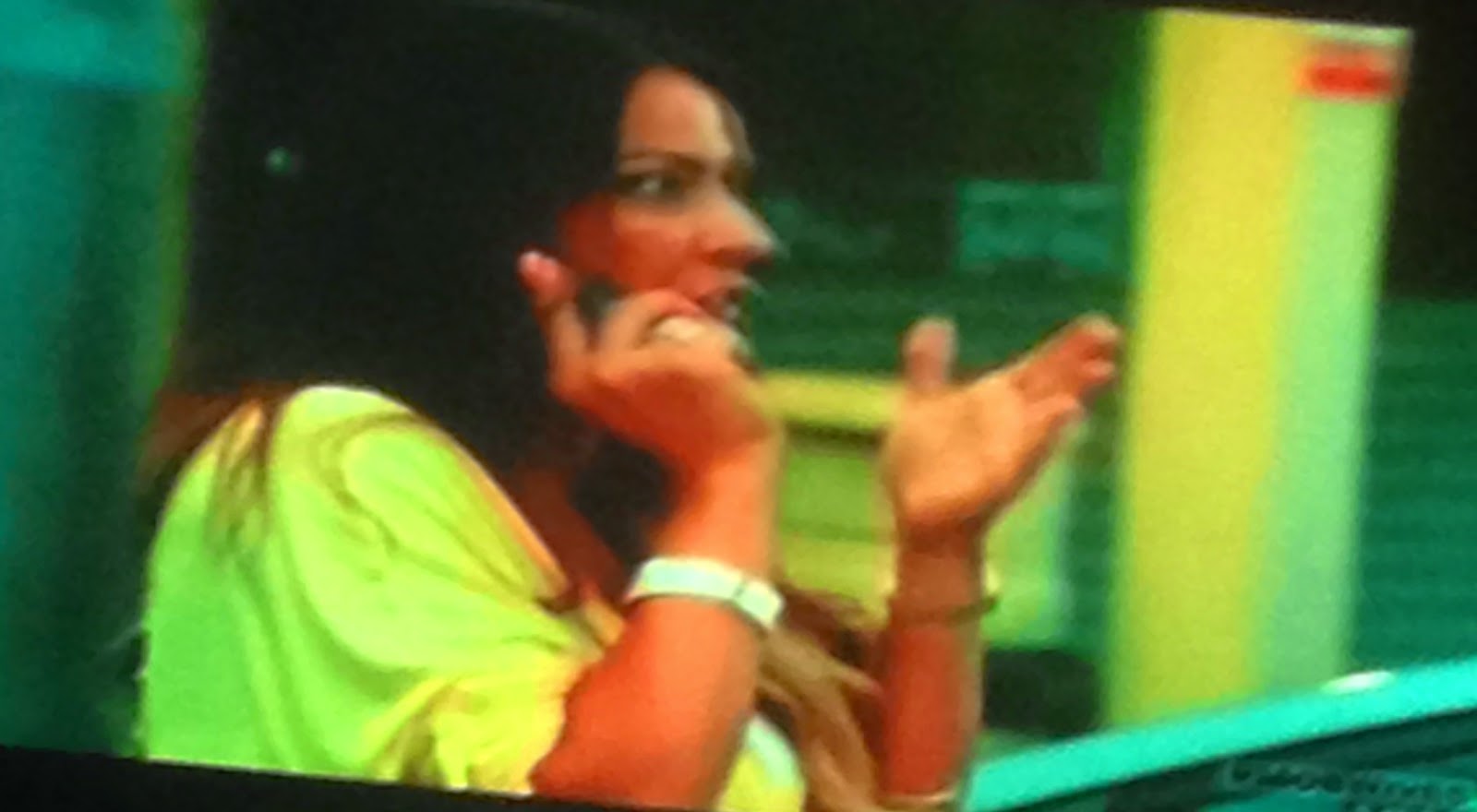 When Drita calls Lee, she fills him in on what happened with Ang's cousin being sentenced. Drita tells him that Junior shot someone and that he testified against Ang's cousin. As a result of Junior's testimony, Drita tells Lee that Ang's cousin got sentenced to 38 years. Lee says that's what the government does.

Renee is at home taking care of AJ as he's recovering from surgery. Renee tells him that he had her worried when she got the call about his accident. AJ tells his mom that he was playing basketball and got hurt. Renee says that it's gonna take him a few months for him to fully recover from his surgery. Renee says that Andrea's been a big help with taking care of him. This is such a cute scene between these two. 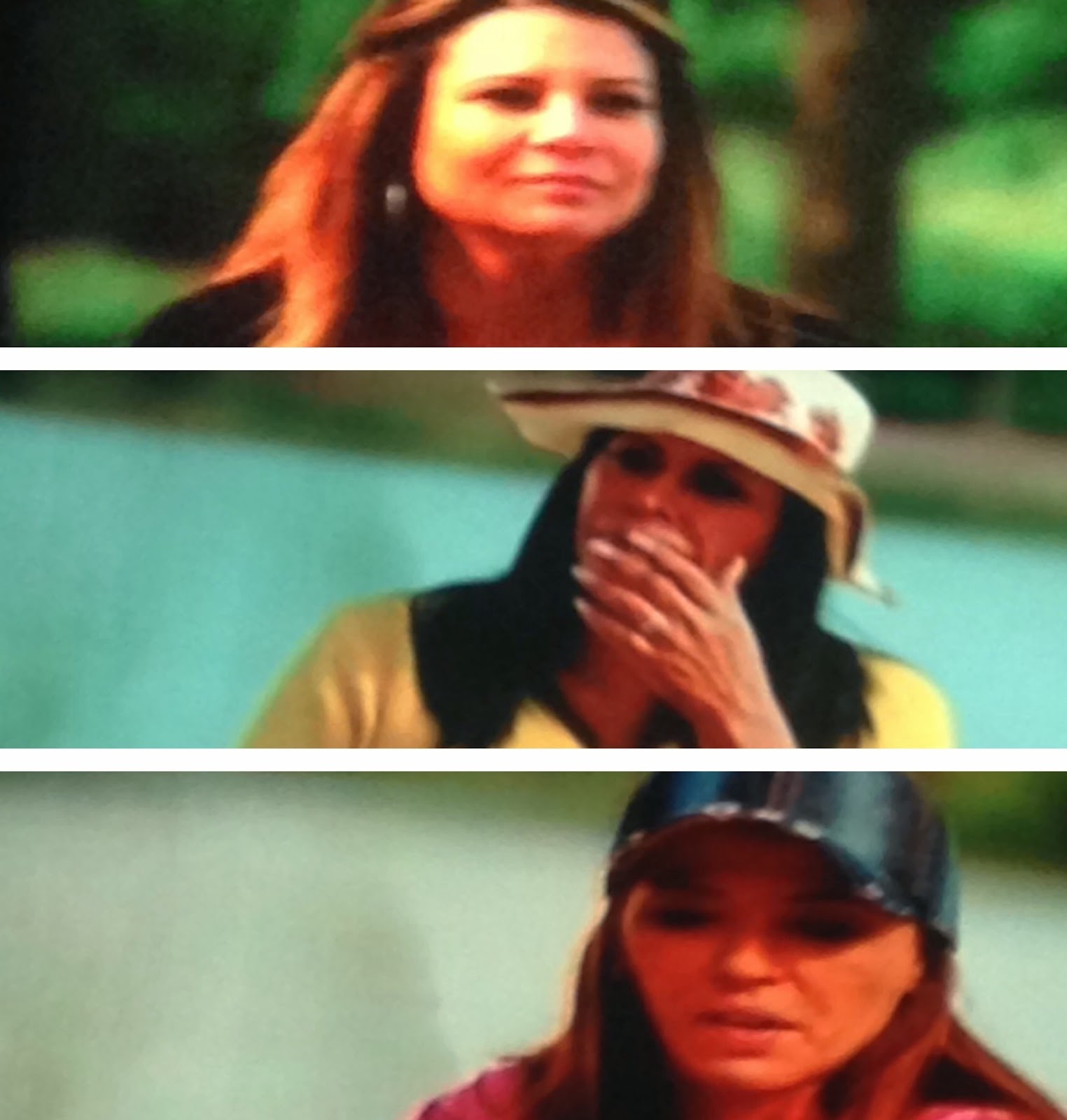 Karen meets up with Ang & Drita to talk about her meeting up with Nat D. Drita isn't surprised that they met up because they both hate Guercio. Karen tells them that Didonato said that no one likes Guercio. Karen also tells Drita & Ang that Didonato told her that Guercio is digging up dirt her. Drita says if the two Natalie's want to kill each other let them. Its Philly against Philly. May the best Natalie win. Karen then invites Drita & Ang on her friend's boat in hopes that Ang & Renee can work things out from their fight. Ang agrees. 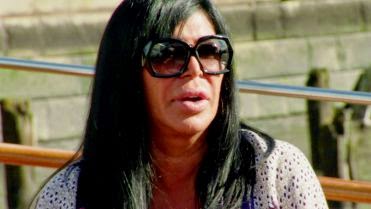 Karen organizes everyone to meet up on her friend's boat to talk about what happened at Drita's magazine party. Karen is hoping that Renee & Ang can settle their differences from their fight. Drita has Ang's back and Karen has Renee's back. Karen tries to mediate the situation. Renee says that Ang calling her a rat is unforgivable. Karen explains to both Renee & Ang that what happened at her house with her and Ang offended Ang. Then, it escalated and went to blows at Drita's party when Ang told Renee that she married a rat. Renee is tired of everyone blaming her for what Junior did. Renee doesn't have control of what Junior did. Renee's point is that Guercio outed her out because her DNA was on the same dollar bill hers was. Guercio's guilty of using drugs too. Ang says she understands where Renee was coming from. Karen says that they've established that Renee shouldn't have mentioned the DNA topic to Ang at Karen house. They agree to forgive each other. Ang pulls out her bible that she brought with her. Ang & Renee both put their hands on the bible and swear that they're over it. 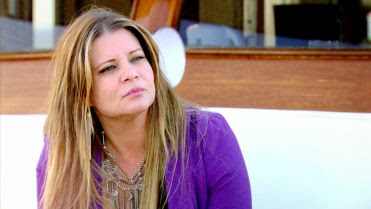 Karen then tells the girls that Guercio went on twitter and told everyone that she's a deadbeat mother for leaving her daughter Karina in Arizona. Ang says that's not right what Guercio did and she's going to confront her about it. Karen says that Guercio goes on social media to bash people with no regards for their families. Karen is disgusted that anyone of them in their circle would stick up for Guercio. Renee wants to know what kind of person (meaning Guercio) are they allowing in their circle to cause problems amongst them. Karen says that she's ready to meet up with Guercio again. Tune in next week for an all new episode of Mob Wives at 9 PM on vh1.
Labels: AJ Graziano, Big Ang, Drita Davanzo, Karen Gravano, Mob Wives, Natalie Didonato, Natalie Guercio, Renee Graziano