Tonight's episode of Mob Wives "The Anti-Social Network" was one crazy episode. It began with Drita getting props together in her Lady Boss store to use for a calendar photo shoot to show off her cosmetic line. Drita decides that the theme for the calendar is going to be "Old Hollywood Meets the Mob". When Karen stops by to look at everything, Karen invites her to her poker party at her new house. Karen tells Drita she's going to invite her cousin Rena, Renee, & Nat D. Drita is glad Nat D. is invited because it will give them a chance to get to know her better and see what she's all about. 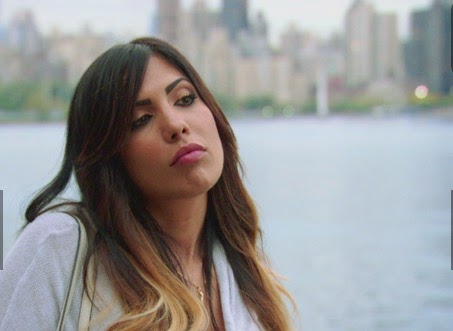 Ang meets up with Natalie Guercio in the park with her dogs to find out why Nat is calling Karen a deadbeat mom on twitter. Before they get to talking about the twitter war, Ang tells Guercio that she made up with Renee and that they're in a good place. Ang warns Guercio again not to talk about people's family. 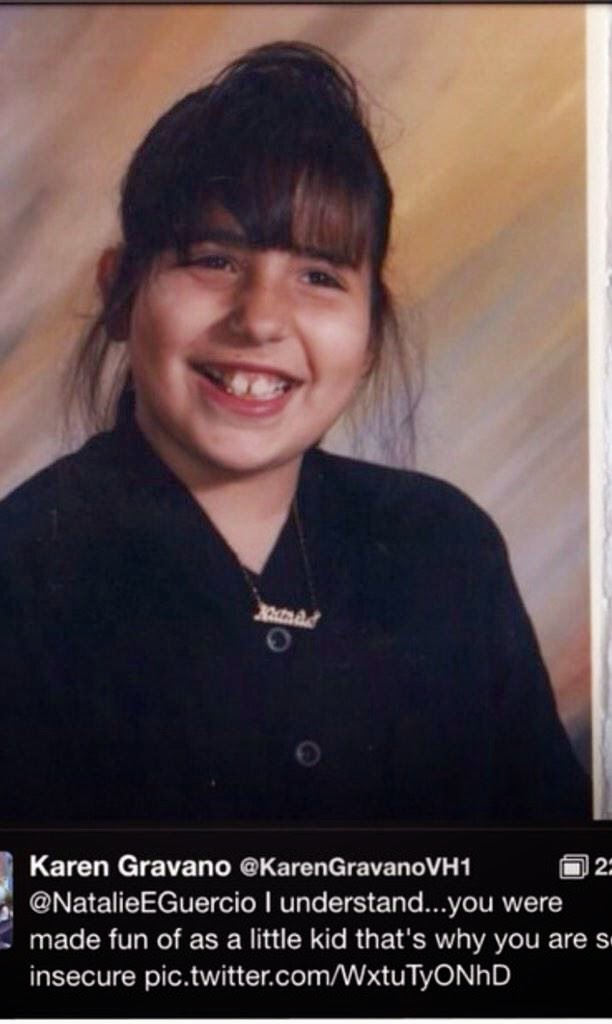 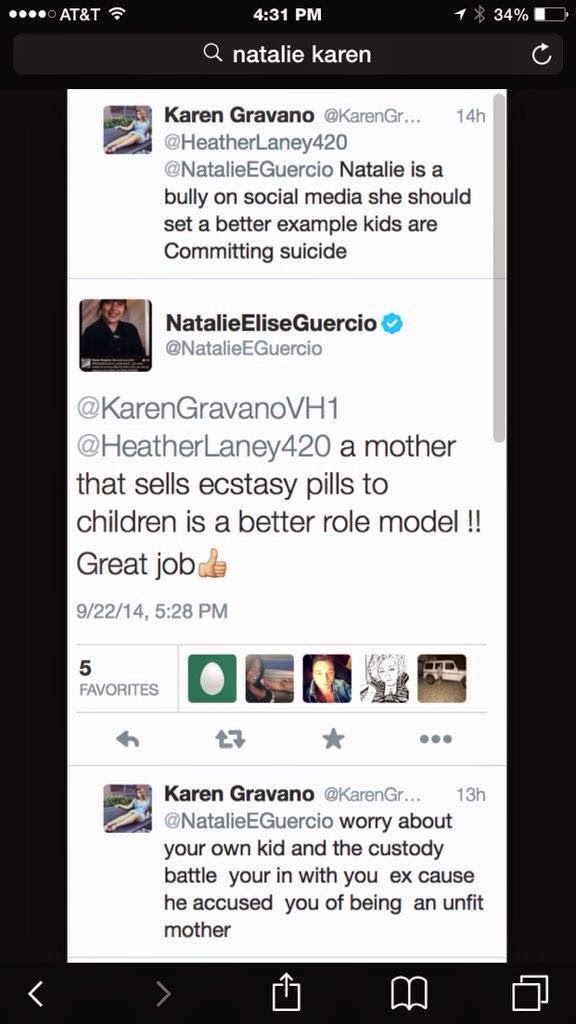 Nat G, claims that Karen started it when she claims that Karen supposedly hacked into her mom's facebook and posted a picture of her from when she was a kid. Above are the snap shots of the twitter war between Nat G. & Karen. I remember when this all went down on twitter back in the fall and its obvious Nat G. started it. She's always posting pictures making fun of Karen. It never stops. Ang tells Guercio that Karen wants meet with her and settle this twitter war once and for all. Guercio says that she would rather send Karen a car then meet with her, but she'll do it for Ang. 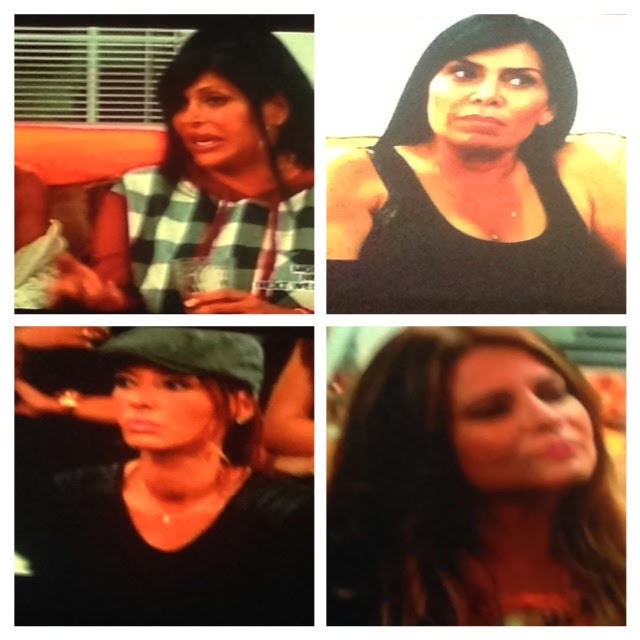 At Karen's poker party, Drita asks Ang to be her model for her calendar for Lady Boss. Ang agrees to do it and to be Miss June since that's when her birthday is. Then Renee, Karen & Nat D. talk about Nat G. and what she did on twitter to Karen.

Karen tells them that her daughter Karina even jumped in to tell Nat G. to stop talking about her mom and to leave her out of it. Renee asks Ang & Drita to come join in the conversation so they know what their girl Nat G. has been doing on twitter. Ang tells them that she met with Nat G. to talk about why she called Karen a deadbeat mom on twitter. When Ang tells them that Nat G. thinks Karen hacked her mom's facebook and that's where she got that picture of her everyone tries not laugh at that explanation. Yup she said it. A mother hacker. I'm telling you I tried not to laugh too when Guercio said that. Nat D. jumps in and tells Ang that she got the picture of Nat. G. from the yearbook and gave it to Karen. 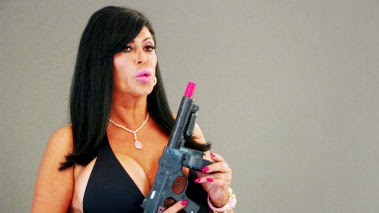 At Drita's Lady Boss calendar photo shoot Ang rocks it out being her model with the gun. Drita says that there's nothing that Guercio doesn't rip on twitter. Drita says that she's gonna do what everyone did when her and Karen were fighting in season 2. Nothing. She's gonna sit back with the popcorn and let them go at it. Ang thinks if Guercio can just stop with twitter everything would be calm.

As everyone is getting ready to arrive at this sit down between Karen & Natalie Guercio, Karen says that Guercio is either respect her or fear her. Renee says that Guercio has done everything to cause drama between everyone. Drita hates fights on the computer. Renee thinks this sit down is pointless. Renee says that nothing good is going to come out of this. Ang arrives first. Then Renee, Drita & Karen. Drita says that violence is the answer. Drita assures Renee & Karen that she and Ang don't agree with what Guercio's doing on social media. 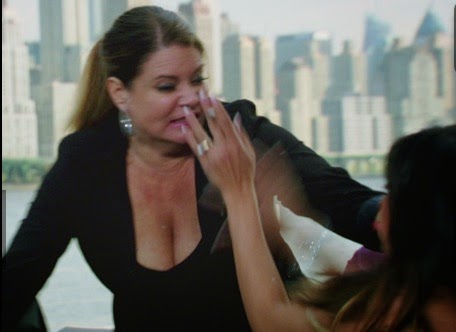 When Guercio finally arrives she doesn't look like she dressed for a "sit down". Renee said it best, she should have brought dollar bills because everyone except Drita is dressed in black, and this Guercio girl comes in dressed as a hooker from 42nd street. Karen jumps right in and asks Guercio why she's calling her a deadbeat mom. When Ang tells Guercio that the social media has to stop she accuses Karen of starting it first. When Drita tries to tell Guercio that Nat D. gave Karen her school picture and that Karen didn't hack her mom's facebook she doesn't listen. Instead, Guercio talks over Karen and says that she shouldn't have posted it on twitter. Drita tries to tell her that Karen & Renee don't like what she's been saying on social media, but she doesn't seem to want to hear it. Things get crazy when Karen tries to get Guercio to admit that tweeting that she's a deadbeat mom was wrong because her daughter sees it but Guercio still doesn't own up to it. Renee even tries to get her to admit that she's wrong, but she still doesn't listen. As Guercio & Renee go at it, Karen sits back quietly. When Renee tells Guercio that the way she handles things is out of control, Guercio tells them to come at her if they can't handle it. Karen sure did just that as she and Guercio fight it out until security breaks it up. Both Karen & Guercio are bleeding. Guercio tries to grab a glass and security tells her to put it down. As they're both escorted to their cars by security, Karen tries to go after Guercio again. Tune in next Wednesday at 8 PM for what looks like round two of this brawl between Karen & Guercio on vh1.
Labels: Big Ang, Drita Davanzo, Karen Gravano, Mob Wives, Natalie Didonato, Natalie Guercio, Renee Graziano