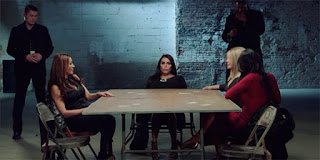 After six crazy seasons the Mob Wives sat down for one final reunion and boy was it good. In the beginning the OGs were placed in a hotel to watch never before seen footage from over the past six seasons. The cast had never seen some of the clips that they were showing them and neither had the viewers. They were very raw and un-edited scenes too. Later on the producers sent Renee and Karen to meet up in the warehouse where they shot a sit down scene earlier this season again. Renee and Karen reminisce about how they first began filming the show in 2011. Then they showed us the sizzle reel that the OGs did from back then. Karen says that at the time they didn't know that the show was going to be called Mob Wives so they started flipping out when they found out. Karen's dad called her and Renee's family didn't want her to do the show once they found out that the word Mob was gonna be in the show title. This was probably the reason why Renee acted like she wasn't happy to see Karen when she came back to town in season 1. Karen thinks Renee was afraid of what her dad was going to think of her hanging out with her because Karen's considered a rat's daughter. 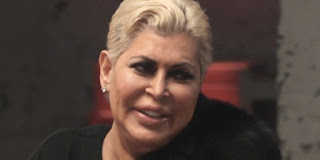 Next, Big Ang shows up and its the last time we get to see her before she passes away a few weeks after this was filmed. They showed Ang's first scenes that she ever shot for the show from season 2 and they were pretty good. Ang says that a bunch of people in the lifestyle weren't too happy with her when she signed up for the show, but she told them she was doing it anyways. Carla comes to the sit down next to talk to Ang. Meanwhile Drita is still at the hotel watching the scenes. She wants to go to the sit down but the producers won't let her. Now we're told that Ang filmed for about two hours at the reunion, but they really only showed her for about ten minutes. The producers tell Ang that she can go home because she didn't look like she felt well. Ang leaves. Drita gets there and is ready to fight Karen. Security jumps in as usual and they're separated. The producers make Karen wait in the back to calm down so that Drita and talk it out with Renee and Carla. Carla tells Drita that they all saw what she said about them on the tapes that they watched in the hotel. Karen walks out and tries to talk to Drita. They both agree that they will never be friends. Brittany and Marissa show up. They try to resolve their issues. Then they leave and we're left with just the OGs. In conclusion the OGs agree to put their differences aside for Ang.
No comments:
Labels: Big Ang, Brittany Fogarty, Carla Facciolo, Drita Davanzo, Karen Gravano, Marissa Jade Fiore, Mob Wives, Renee Graziano 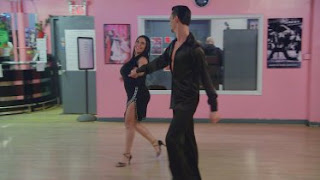 The final episode of Mob Wives aired tonight and it was really good. There were some happy moments and then there were some sad moments. In the first scene Renee performed her ballroom dance for Karen, Carla, Nicole, AJ and Andrea. Renee has really come a long way since season 1. 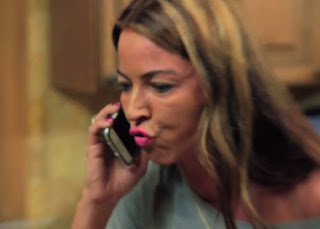 Drita calls Marissa and says that she wants to have a sit down with her, Brittany and Karen to get everything out on the table. In this scene Drita goes off on Marissa. 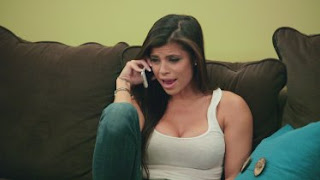 In this scene they kind of broke down the fourth wall and showed a lot of the camera crew in Drita's house when she hangs up on Marissa. Marissa says that she's confused about the whole situation too. When they get off the phone, Marissa tells the producers that phone call wasn't even a conversation. 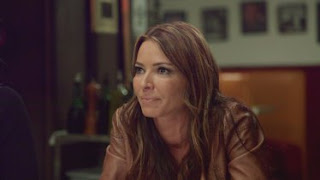 Over at the sit down between Drita, Brittany, Karen and Marissa things get heated fast. Karen and Marissa don't even get a chance to walk in the room and sit down before Drita goes off on them. Things go left really quickly. They pretty much get into one of the biggest fights ever. It almost reminded me of Karen and Drita's fight on the rooftop in season 1. Remember that one? That was pretty epic. I guess things don't change between these two. 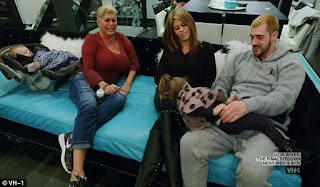 Towards the end of the show Ang revealed that her cancer came back and (as we all know now) it spread from her lungs to her head. I gotta hand it to Jenn Graziano because anyone who could make one of the greatest series of all time that's not scripted is one of the best producers ever. Props to her for creating this final scene with Ang. Thank you Jenn Graziano for bringing Ang to our TVs for the last 5 seasons. In the end all of the girls issues came in full circle from season 1. Just like Ang is heard saying (in her final scene), "what's done is done".
No comments:
Labels: AJ Graziano, Big Ang, Brittany Fogarty, Carla Facciolo, Drita Davanzo, Karen Gravano, Marissa Jade Fiore, Mob Wives, Renee Graziano

Tonight's episode of Mob Wives was another one dedicated to Big Ang as it began with Carla, Renee and Karen going over to her house with food that they made for her as she's recovering from having part of her lung removed from where the doctors thought she had early stages of lung cancer. As you could tell from this scene, this recovery process was really tough on Ang (noticeably so).

This episode was mainly about the feud between Karen vs. Drita and Brittany which is why it was titled "Drittany". When Brittany meets up with Karen she tells Karen that she wasn't looking to instigate the issues between Karen and Drita and she doesn't want to get in the middle of it. Brittany feels like Renee is an antagonizer and that Carla is a joke.

Drita meets up with Brittany at her cousin's bakery where she works. Drita says that Karen used to get a lot of attention when she was younger because of who her dad was. Brittany tells Drita what she talked to Karen about. Drita assures Brittany that she doesn't have to worry about her talking about Karen to her. Brittany tells Drita that she wants to talk it out with Carla and Renee but Drita doesn't think it will go too well.

Renee continues to dance with her dancing partner Alex as he's getting her ready to perform in front of people. Renee's actually doing really with this new hobby. 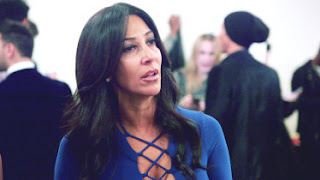 Over at Karen's art event Ang, Carla, and Marissa show up to support her. Ang tells the girls that she went for her checkup at her doctors and that he told her that she's officially cancer free. They're all excited for her that she beat cancer. Carla is glad that Brittany didn't get invited because she doesn't think she knows what's going on between Drita and her, but she does want to hear what she has to say about her. Therefore she does want to meet with Brittany. 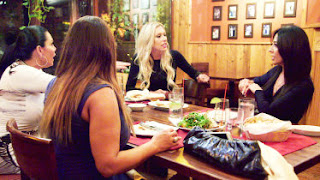 When Brittany sits down Renee, Karen and Carla for dinner things don't exactly go so well. Carla says that she and Renee want to know why they weren't invited to her fashion event. Brittany says that it wasn't anything personal. Brittany said that they wanted her not to like Drita and that Carla is the one who told her that Marissa was a flip-flopper. Carla says that Ang was the one who said it not her. Ang shows up and agrees with Carla. Bottom line is that Brittany feels like Renee and Carla instigated her fight between her and Marissa. Brittany says that they can't handle that she likes Drita. Renee tries to tell Brittany that they don't care if she's friends with Drita but just try to get to know her before she pledges her loyalty to her. Brittany gets up to leave but not before she tells them all off. Well everyone but Ang that is. Ang was just kind of trying to stay out of it. Next week is the series finale and you don't want to miss this. Also, there will be a tribute to Ang that will air right after the series finale.
No comments:
Labels: Big Ang, Brittany Fogarty, Carla Facciolo, Drita Davanzo, Karen Gravano, Marissa Jade Fiore, Mob Wives, Renee Graziano
Newer Posts Older Posts Home
Subscribe to: Posts (Atom)