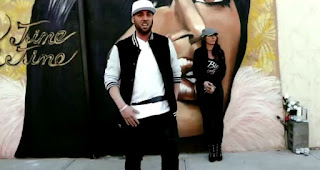 Its hard to believe that its been a month since late Mob Wives star Big Ang made her final appearance on our TV on the last episode of Mob Wives. Its even more harder to believe that its been a little over two months since we the fans heard the devastating news that Big Ang passed away from her year long fight against cancer. There's no doubt Big Ang left a lasting impression in all of our hearts. In fact just about a month after Ang passed away, her sister Janine got someone to paint a mural of Ang that is on the side of Janine's children's clothing store in Staten Island. Shortly after the mural was unveiled to the public, Drita Davanzo along with her friends Ron Montana, JOJO Pellegrino Anthony Acid (producer) created a song called BIG ANGel about Ang and the legacy she leaves behind.

As if the song wasn't a hit enough with Drita's rap verse on it, the video that she and her friends did for it is even more amazing. Be sure to check out the music video above. Ang would be very proud of Drita for this song.
1 comment:
Labels: Big Ang, Drita Davanzo, Mob Wives
Newer Posts Older Posts Home
Subscribe to: Posts (Atom)