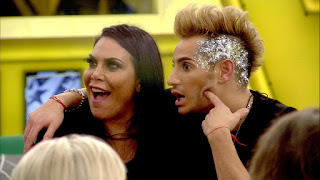 On tonight's episode of Celebrity Big Brother the house guests started talking about oral sex. Renee starts to tell Biggins that she admired her idol gangster moll Virginia Hill because she admitted to the public that she did where she got for giving the best bjs Biggins says that he agrees with her because thats how women have become so successful. Then he tells her that men are better at it to which Frankie agrees with. Next the house guests learn that they have to convince Biggins to nominate them so that he thinks that he's sending them home. What Biggins doesn't know is that there's a catch. The person who he thinks he's nominating to send home is actually the one who is safe from elimination. The house guests decide that they need to convince Biggins that they want to go home. Saira came up with a good excuse of her own. She pulls Biggins aside and tells him that she really misses her kids and that she doesn't want to be away from them this long in the big brother house. Next, Jame Whale has a fight over religion with Renee and Saira. I can see that he needs to be eliminated first. Then the house guests get called in the living room to listen to Biggins confessionals while he talks to Big Brother and tells them who he wants to nominate. 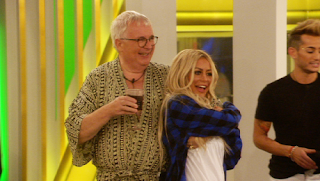 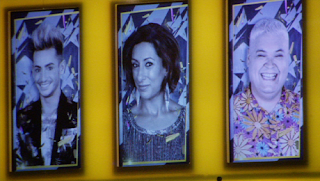 In the end Biggins ends up kissing Saira and she is safe. Heavy D tells her that she played it smart by telling Biggins that she misses her kids and wants to go home. Biggins confesses that he really didn't want to nominate Saira but he felt bad that she misses her kids. Biggins really wants Bear and Lewis to go home. At the end its 4:30 am and everyone has gone to bed except for Renee. Renee can't fall asleep and ends up talking to Bear. Be sure to check back on here for more updates about how Renee's doing on the show.
Labels: Celebrity Big Brother UK, Renee Graziano