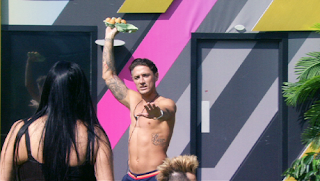 Tonight's episode of Celebrity Big Brother had so many unexpected emotions rolled into one. There were happy moments and there were sad moments. Then there were "OMG I cant believe that happened" moments. In the beginning of day 21 Bear tried to play a trick on Renee with eggs but she quickly caught on and later got him back by pouring water on him. 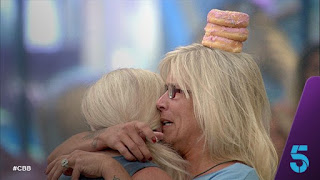 There were multiple shopping tasks that they had to complete today. They were each split up into different groups to complete the tasks. The first task was that Sam, Renee and Bear had to stand with dounts stacked on their heads while big brother tried to distract them. Their first distraction was a window cleaner who was also a stripper. I think Frankie had more fun with him than Renee did and it wasn't even his task. Next was Sam's mom who popped in to say hi. 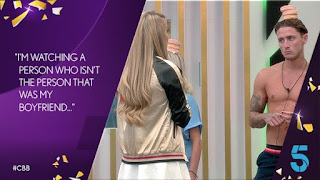 However there was one distraction that not only distracted Bear but also shocked the whole house and that was when Bear's girlfriend Lillie showed up. She had been watching the show from home and she's seen everything that he's done with Chloe. So she wanted to give him her two sense and tell him how hurt she was when she saw him hook up with Chloe. 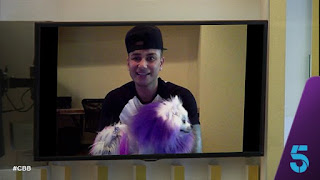 Aubrey and Ricky's tasks was to count sheep on the screen in front of them. As a distraction for Aubrey her boyfriend DJ Pauly D showed up on the screen behind her to give her a sweet message. Meanwhile the house guests were watching it from the living room. 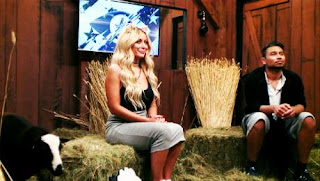 One of Ricky's friends also showed up on the screen to give him a message too and to wish him good luck during the rest of his time in the house. 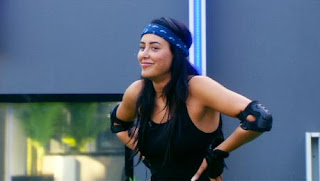 Marnie's task was count how many things she saw in the big brother's nieghbor's house while her cousin came out to distract her. Be sure to check back here to see how Renee's doing in the house. I hear she gets a letter from AJ in tomorrow's episode.
Labels: Celebrity Big Brother UK, Renee Graziano