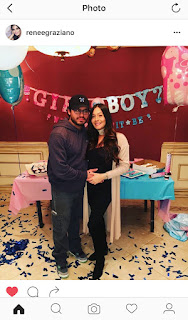 Its been nearly eight months since Mob Wives called it a wrap after 6 successful seasons. While there were many ups and downs on and off the show with all of the cast, there's definitely one major up that Renee Graziano is thankful for this holiday season. Her baby boy AJ and his long time girlfriend Andrea have just announced that they are expecting a boy.

MY BABY IS HAVING A BABY GOD IS GREAT!!! IM GONMA HAVE A GRANDSON I COULDNT BE HAPPIER I LOVE U @aj_graziano AND @andreasimeone_ SO MUCH .. IM GONNA SPOIL THAT BABY ❤💙
A photo posted by Renee Graziano (@reneegraziano) on Nov 20, 2016 at 4:34pm PST

Renee along with the rest of the family and friends took to instagram today to reveal the announcement.


We're told the gender reveal party was held today and that AJ is so excited to be a dad. Baby Graziano is due May 2017. We want to wish a huge congrats to the new expecting mother and father as well as the new glamma. We know AJ will be a great dad.
Labels: AJ Graziano, Mob Wives, Renee Graziano