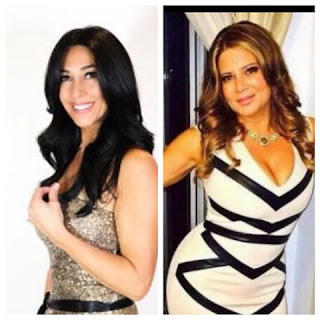 I haven’t been on Twitter in a minute I come onto of this action....What do you guys got going on there in NY https://t.co/HoHcehv6X0
— Karen Gravano (@KarenGravanoVH1) December 12, 2017

I got called in for a sitdown I’ll see you on Thursday my beautiful friend 😘 https://t.co/HoHcehv6X0
— Karen Gravano (@KarenGravanoVH1) December 12, 2017


Karen confirmed to Carla on twitter that she's been asked to meet for a "sit down" this week about this idea. So if these two return for the reboot that would mean that only 2 OGs are gonna be a part of it. As we previously told you, Drita has opted out of the reboot because she has her own projects going on which we can't wait to see. At the moment there is no word yet if Renee will return. Sources have told us that Vh1 hasn't picked up the show reboot yet, but it could be a possibility or it could be on another network. We'll keep you posted.
Labels: Carla Facciolo, Karen Gravano, Mob Wives