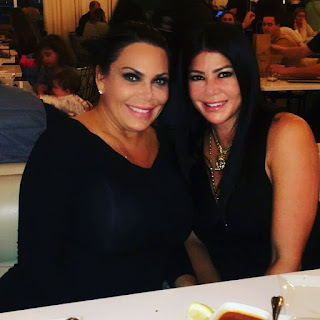 Mob Wives Reboot has taken FULL EFFECT as almost all of the cast has begun filming with each other. From Ramona to Carla to Karen to Renee to even Philly's own Alicia and Natalie G have all begun filming with each other. Back in November Renee checked herself back into rehab in Miami at Summerhouse Detox after she had some surgery to fix a botch body job that she had on season 2 of Mob Wives that didn't go well.

She spent 10 days at summerhouse before transferring back to Transitions Rehab where she finished a full 60 days stint.

Its been a long time coming, in my life I have made many mistakes, i wanted to make things right, I even let good friends go for no real reason, Aside for whatever transpired on mobwives was many moons ago ... today i choose to call her a friend as we sit here with my son and grandson realuzimg whats truly important. @aliciadimichele #FamilyOverEverything
A post shared by Renee Graziano (@reneegraziano) on Jan 26, 2018 at 5:24pm PST


I wish more than anything I could have shared the special moment that Renee and I had tonight. It takes a strong woman to admit any wrongdoing and for all this time to feel bad for things that have transpired between us. I admire your courage and your growth @reneegraziano Thank you for bringing your beautiful family here tonight. I think I'm AJ's first official girlfriend😍 #familyovereverything
A post shared by Alicia DiMichele VH1 (@aliciadimichele) on Jan 26, 2018 at 7:05pm PST

She checked herself out of rehab on Thursday January 25th and flew back to Staten Island where she began filming scenes for the upcoming reboot of the show with Alicia DiMichele. The two documented their reunion on social media. We're told Alicia and Renee made amends and that Alicia even got to meet Renee's grandson baby AJ.


We’ve come a long way Renee & I. Such a great time talking, laughing, catching up...leaving the past in the past. I’m happy we are both at that point in our lives where we can actually laugh at all the BS we did to each other😂 Renee I’m so proud of you and how far you have come! Your strength your confidence, You look absolutely Stunning! Love U😘 #newbeginnings #friends #minime #goodvibesonly #live #laugh #love #forgiveness #miami #mobwives
A post shared by N A T A L I E • E L I S E (@natalieeguercio) on Jan 22, 2018 at 3:28pm PST

Alicia wasn't the only one who Renee made amends with. We're told that before leaving Miami, Renee met up with Natalie Guercio as well. They too documented their reunion on social media as well. Sources have told us that the two philly girls have signed on to do the reboot of Mob Wives as well. So far the ones who are in it for the reboot of Mob Wives are, Renee, Carla, Karen, Ramona, Alicia, and Natalie Guercio. Even though vh1 has not picked Mob Wives for the reboot (and neither has any other network) this cast lineup looks like its gonna be good to watch if and when it airs.
Labels: Alicia DiMichele, Carla Facciolo, Karen Gravano, Mob Wives, Natalie Guercio, Ramona Rizzo, Renee Graziano